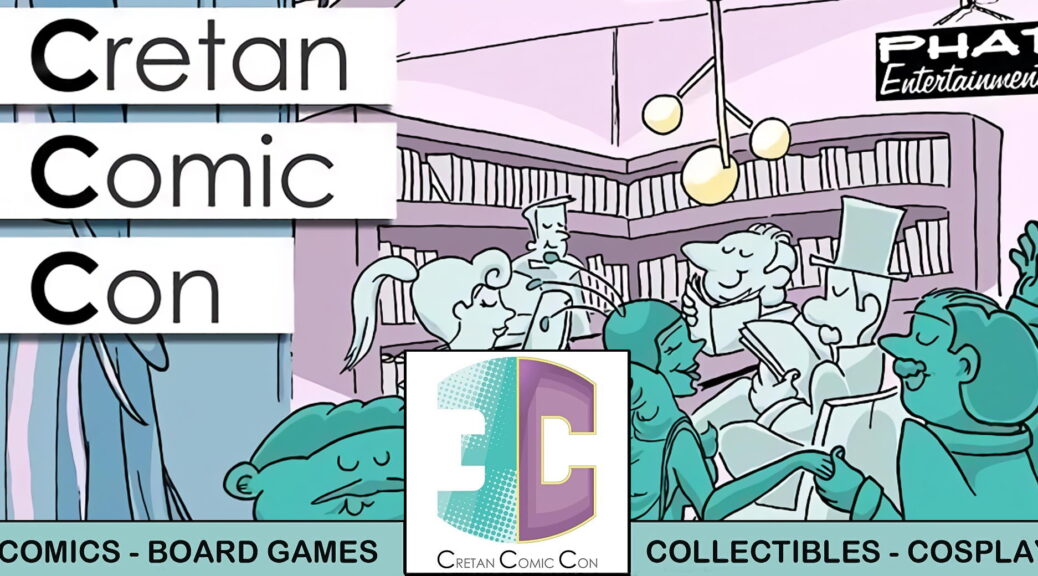 Crete has now its own big Comic Convention! Cretan Comic Con! We talk about Cosplay, the event and its work!

THE CRETAN CONVENTION OF COMICS !

A Comic Convention in Crete, Greece? Yep! On September 28-29, 2019, Cretan Comic Con, also known as 3C, makes its first appearance at the Youth Center in Heraklion, Crete, providing for two days a common roof to all fans of comics, and others, on the big Greek island and gathering more than 3000 visitors!

Comics, board games, artists, exhibitors, collectibles, and more are there to be found! Needless to say, our favourite Cosplay being among them, with the first Cretan Comic Con gathering 31 Cosplays, in 2019!

Multiple panels, presentations, workshops, exhibitions, and much more, compose an extensive program, covering any tastes a visitor might have! Among them, two Cosplay Contests, one on stage and one online with Cosplay photos shot at the event!

In 2020, and as it seems in 2021 too, due to the pandemic, there was no opportunity for it to return for a second time! Once conditions allow, it will return in a larger venue, with much more content, guests and a richer schedule!

Let’s talk about everything in detail, with Cretan Comic Con‘s organizer, Vangelis Chatzidakis!

BRINGING THE WORLD OF COMICS TO CRETE !

1) Tell us a few words about Cretan Comic Con, its history and contents! What led you to proceed with organizing Cretan Comic Con? When and how did it start? Why in Crete? What themes is it about? Are those themes based on the organizers’ personal interests, and if so, when did you start taking an interest in each of them, before your first event?

Cretan Comic Con was hosted in 2019 for the first time, as “trial” more or less. It began in 2015 as an idea, when I participated as an artist in Comicdom Con Athens for the first time, where many of my colleagues gave me the idea to organize something in Crete, which is my place of permanent residence. Specifically in Heraklion, a big city with lots of young people and more, something similar had never happened before. So we decided that it would be the perfect place for a Comic Convention. 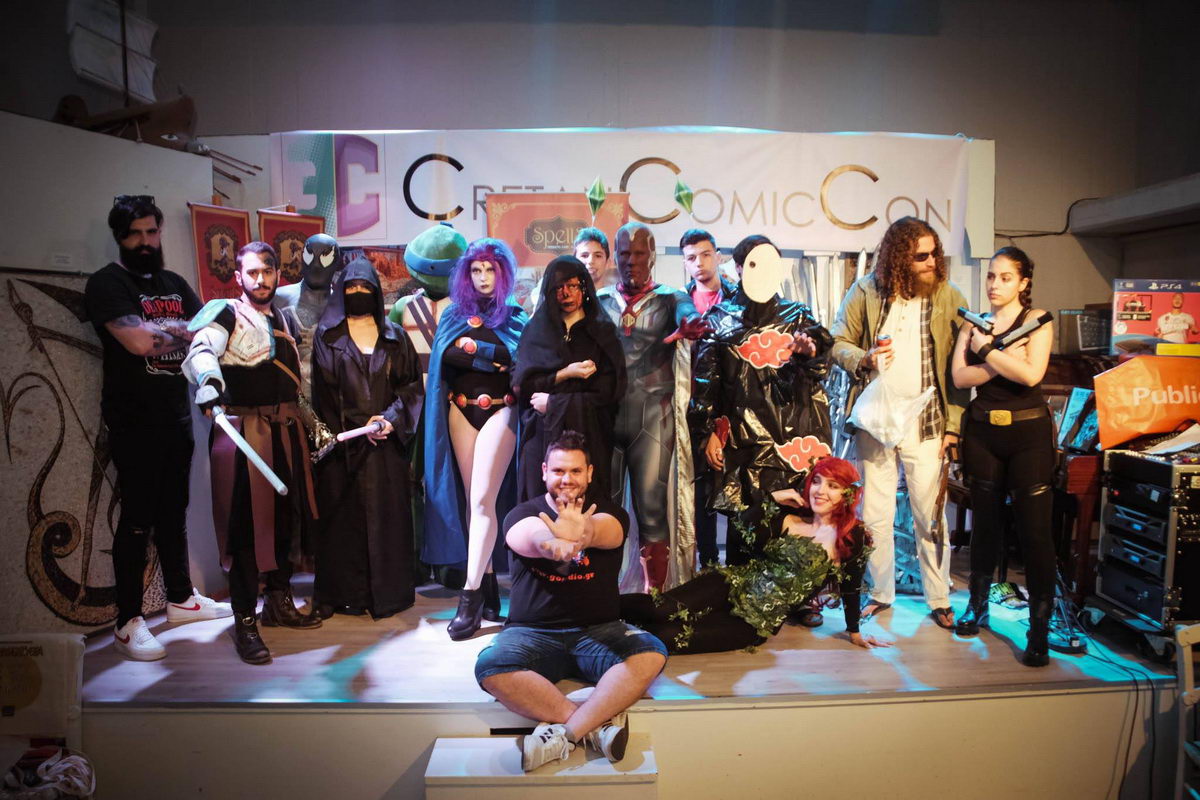 2) How long and what exactly did it take until the first event was possible? What can one find there and how do you think it differs from other events of similar type or theme in Greece?

As I mentioned above, the idea had started to emerge in 2015, but I decided that in 2019 that I was personally ready to undertake such a project. Initially it takes a lot of motivation, passion and personal time, that’s granted. The help we received from the Municipality of Heraklion and specifically from Mr. George Antonakis was also very important. At 3C we try to include many topics and exhibits the visitor may be interested in, whether they are booths with comics, books and merchandise, or the artist alley where visitors can meet favorite Greek artists. We also have various events for all tastes, such as panels, presentations, cosplayers etc. 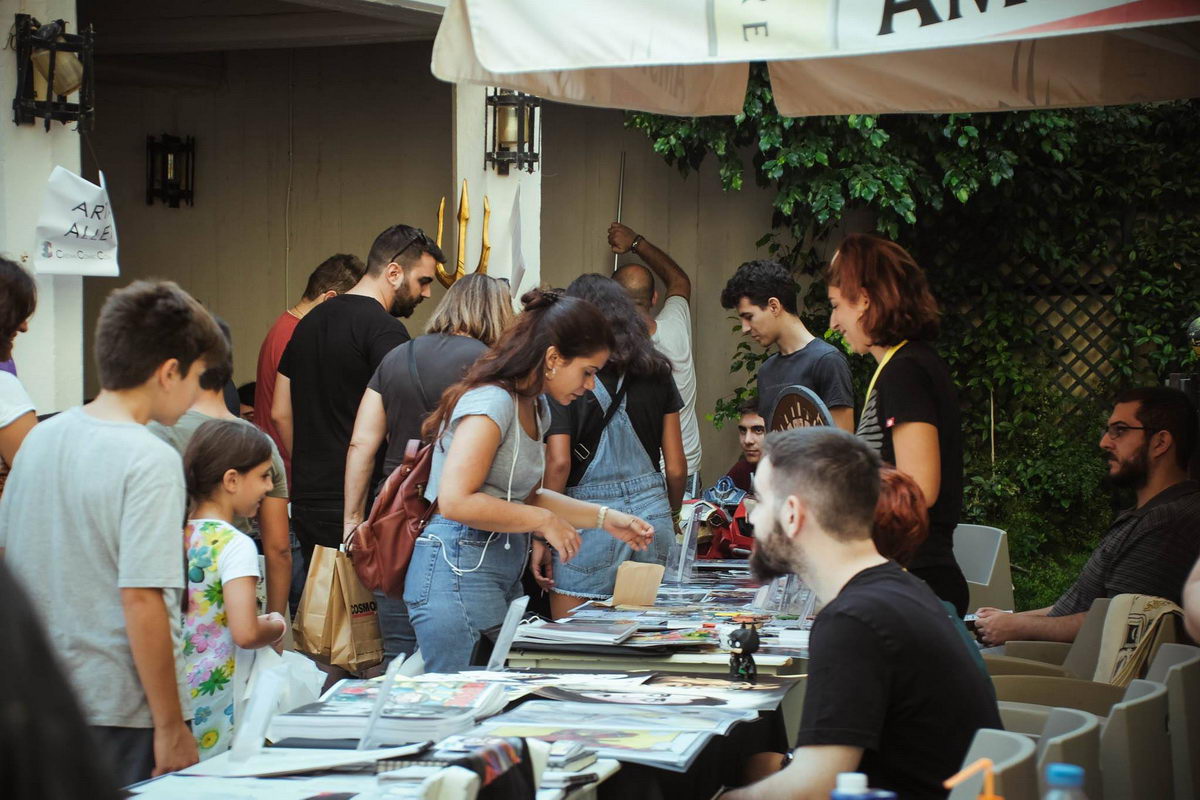 3) How much effort, time and money does it usually take to set up Cretan Comic Con? What is the preparation plan that you follow?

It’s all about what one wants to achieve through such an event. We may as well have such an event with minimal expenses and effort, but that would be disrespectful to visitors who dedicated their time to visit 3C. All of us who work on the event dedicate a lot of our personal time. Unfortunately any preparation plan there was was wasted due to Covid, but I can say that with the first 3C’s end in 2019, thoughts and planning for the next one started immediately on the next day, regardless if it didn’t take place in the end. 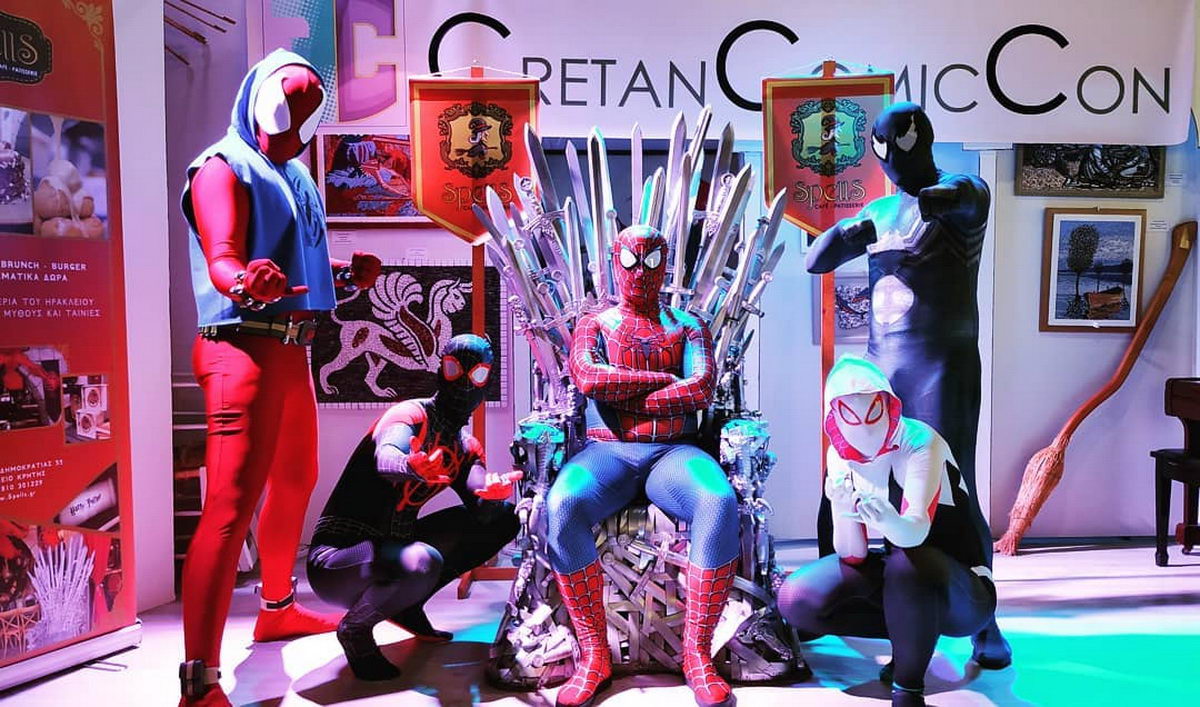 4) How did you feel during the first Cretan Comic Con and how after its end? Describe this experience to us.

The feelings were really great! Any initial uncertainty quickly became excitement and satisfaction! Of course, many factors played a role in making this happen. First the participants, whether professionals or artists, who took the “risk” to participate in a new event, then the Cretan audience that really embraced Cretan Comic Con and honestly the attendance exceeded even my most optimistic expectations, and of course all the volunteers who did everything possible to avoid the slightest problem for two days. Personally, I want to sincerely thank them all once again. 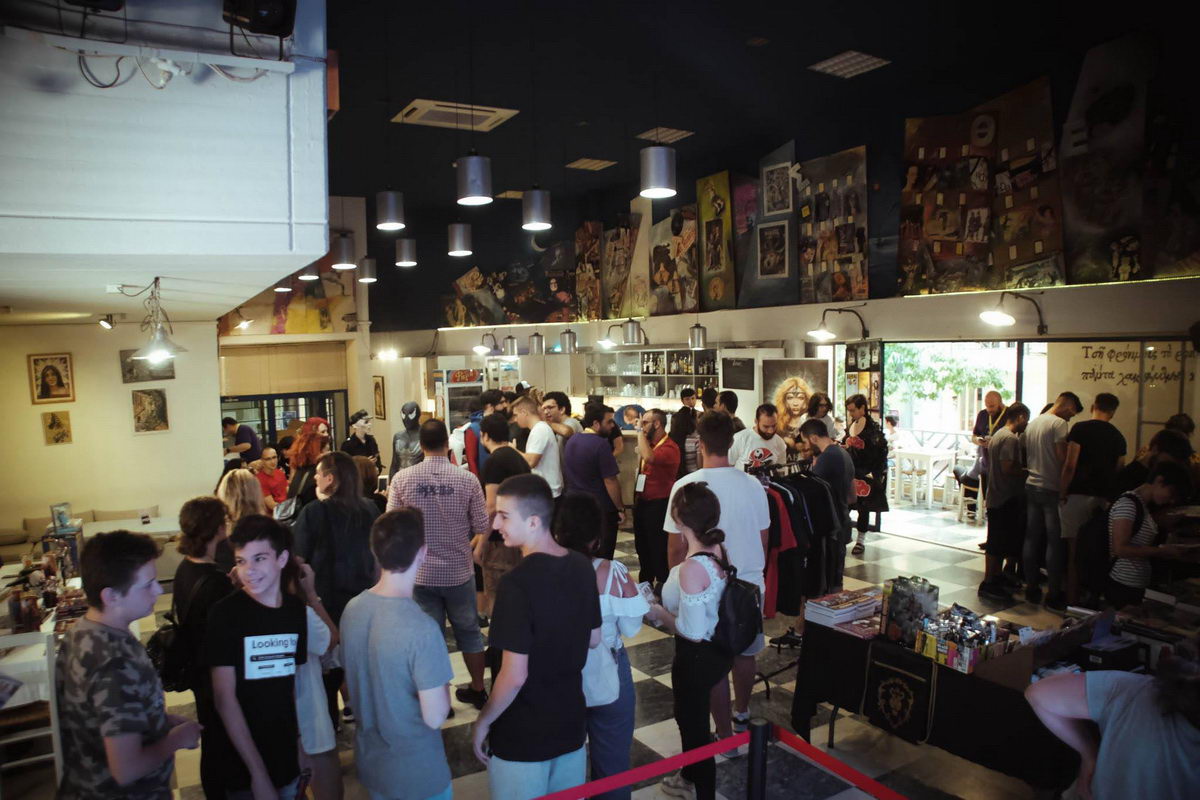 5) What’s your opinion, in proportion to Greece’s size, about the size and level of the audience of the scene towards which Cretan Comic Con is addressed? What situation did you notice related to this in Crete?

Everyone no matter the age showed great interest in both the comics, the creators of those who were present with whom they could talk, and the cosplayers who were a pleasant surprise for both young and old. 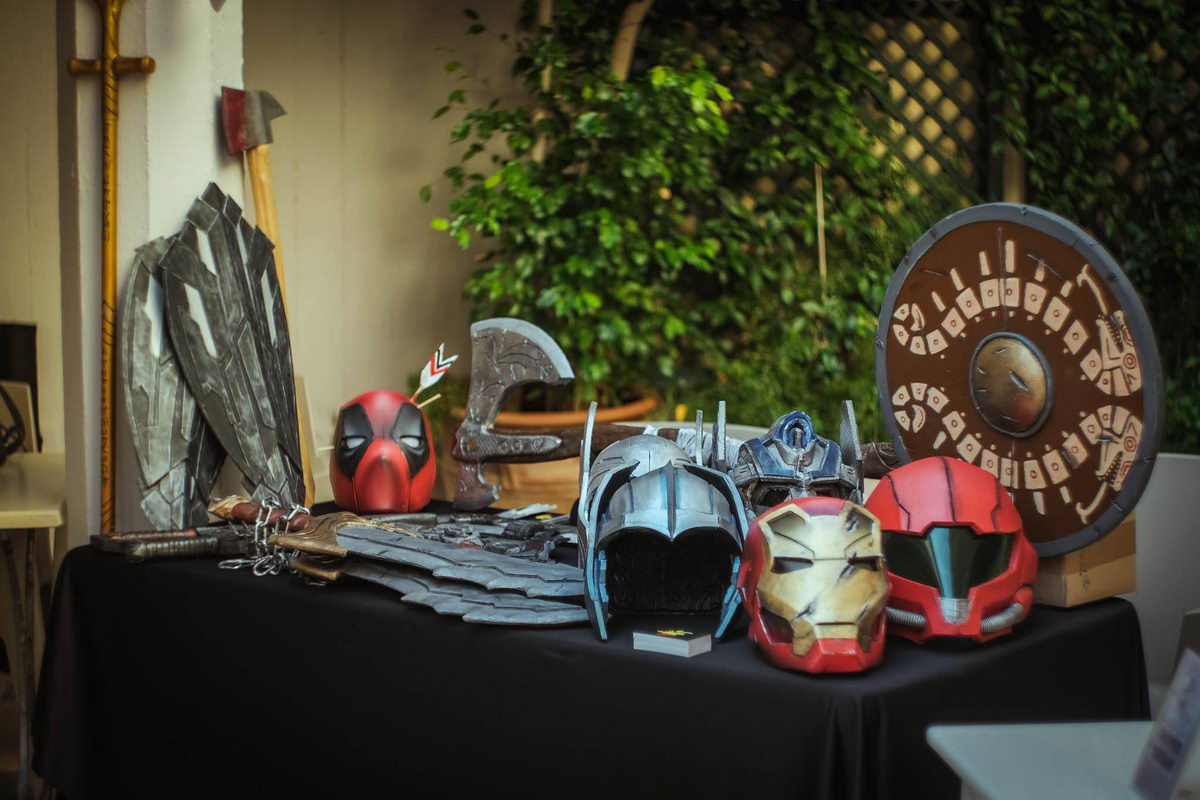 6) Are you satisfied with the people’s response to Cretan Comic Con, as well as with the number of Cosplays attending?

The people’s response to our first event was unexpectedly great. Whenever an event takes place for the first time, without any prior comparison, it’s a risk and there’s the stress factor of whether it will have the corresponding response. People actively participate in all the cultural events being organized, which aren’t few, and with the same enthusiasm embraced Cretan Comic Con, something that was missing from the cultural scene.

Cosplay is found at comic cons because costume play is directly related to comics, since in essence a category of Cosplayers are comic book heroes. In addition, like all comic cons, Cretan Comic Con couldn’t neglect to embrace this scene, since it’s an opportunity for all cosplayers to have a common meeting place and highlight their work or, why not, just have fun. Finally, we must not forget how important the role cosplayers play in every festival is. They give special vibes, color and liveliness, not only with their appearance, but also with their behavior, because cosplay isn’t just to get into a disguise, it’s a way of life.

Cosplay will continue to be part of Cretan Comic Con, having the Cosplay Competition which was a huge success, and we hope it will continue to be in the future. Also, as I said before, cosplayers are essential for the success of any comic con, so as long as there’s interest and participation for cosplay, we will always do our best to highlight it in any way. 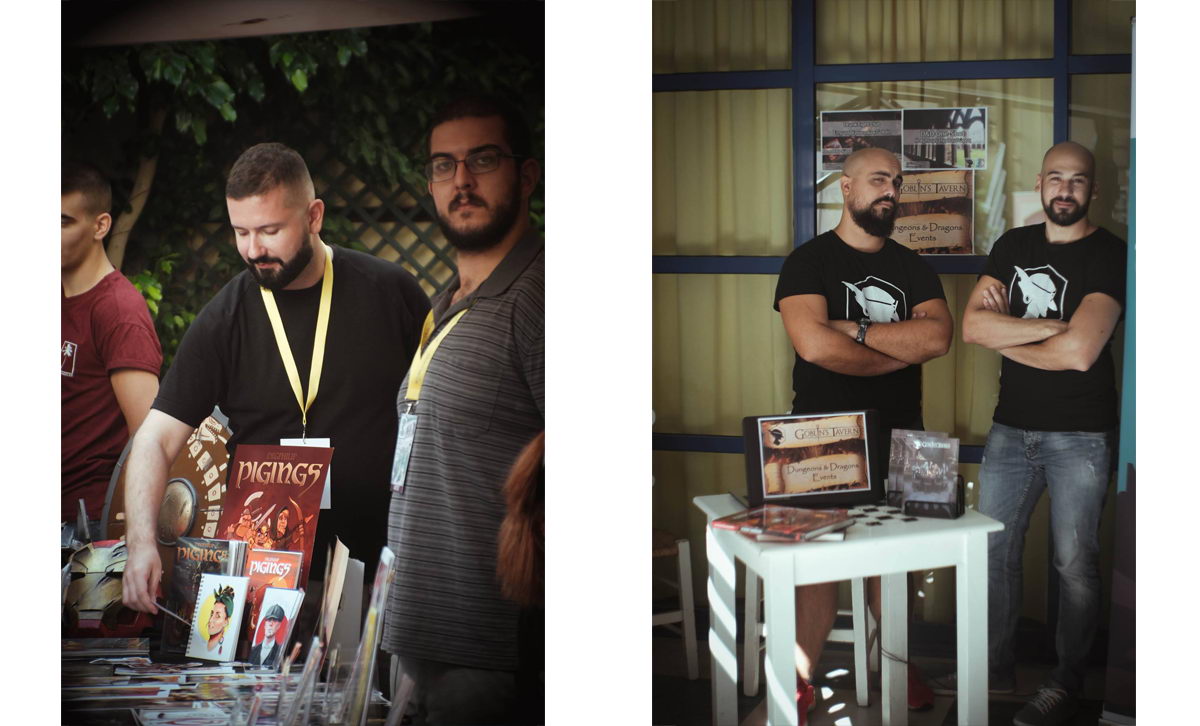 9) Is there a long term goal or personal dream you want to achieve through Cretan Comic Con?

There’s only one goal, the one that was decided upon from the beginning when we decided to organize the first 3C: to become one of the important cons of Greece, an event that the public will look forward to visit every year to have a good time. 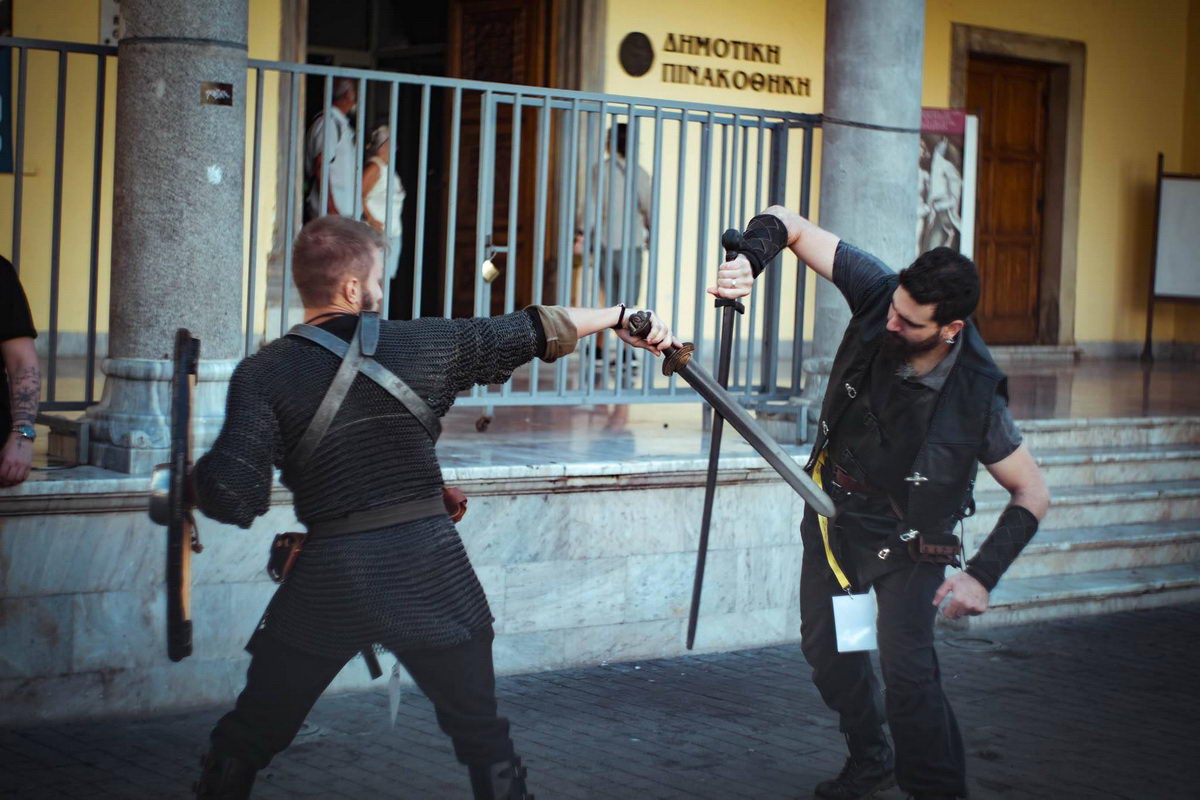 10) Is there any important or funny experience that happened during Cretan Comic Con that you will never forget?

Honestly, all the emotions were so intense during this first event, that even the slightest thing seemed so important, that I personally can’t single out anything. I will focus once again on the public’s attendance who really seemed to be having fun, as well as on the fact that everything went not just as we had expected, but much better! 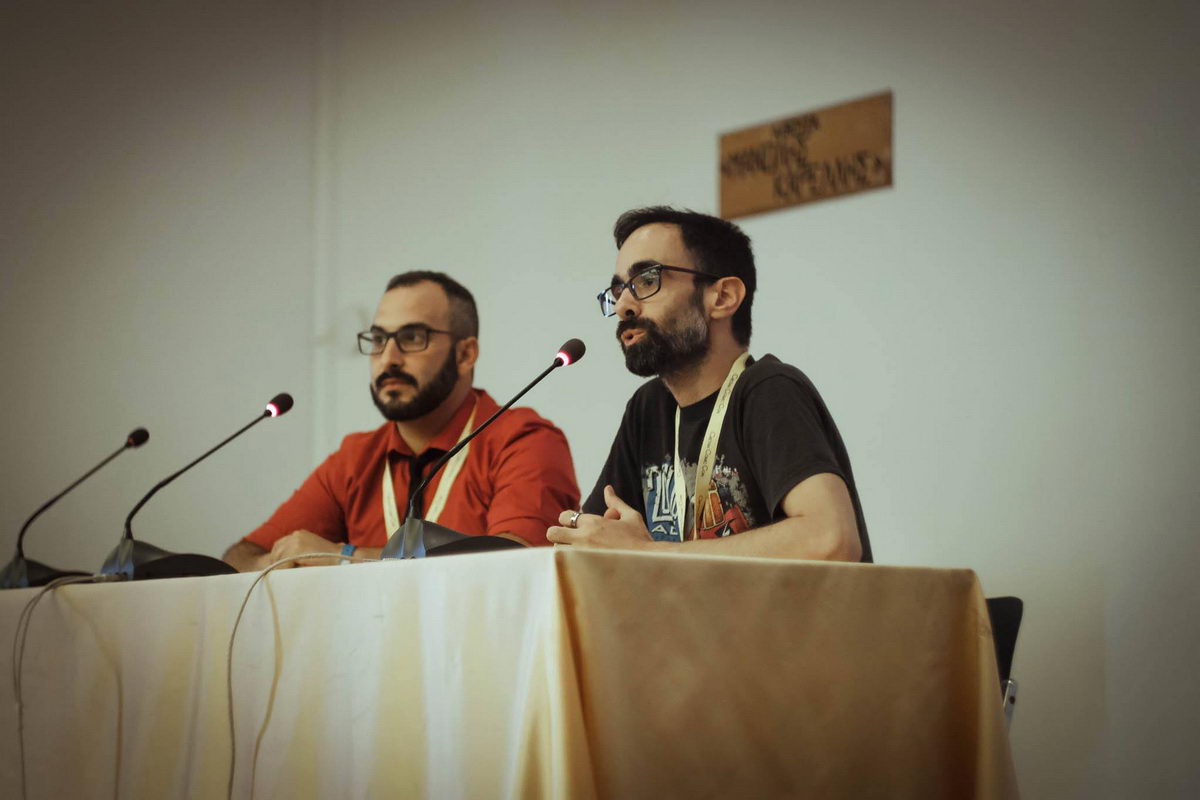 11) What is the first thing you would tell to someone who seriously considers visiting Cretan Comic Con for the first time? And what can he expect to see there in the future?

To visit us without a second thought, to really feel part of a great company with common interests and way of thinking. 3C is a festival where everyone is welcome, and we want everyone to feel comfortable with what they are and represent. 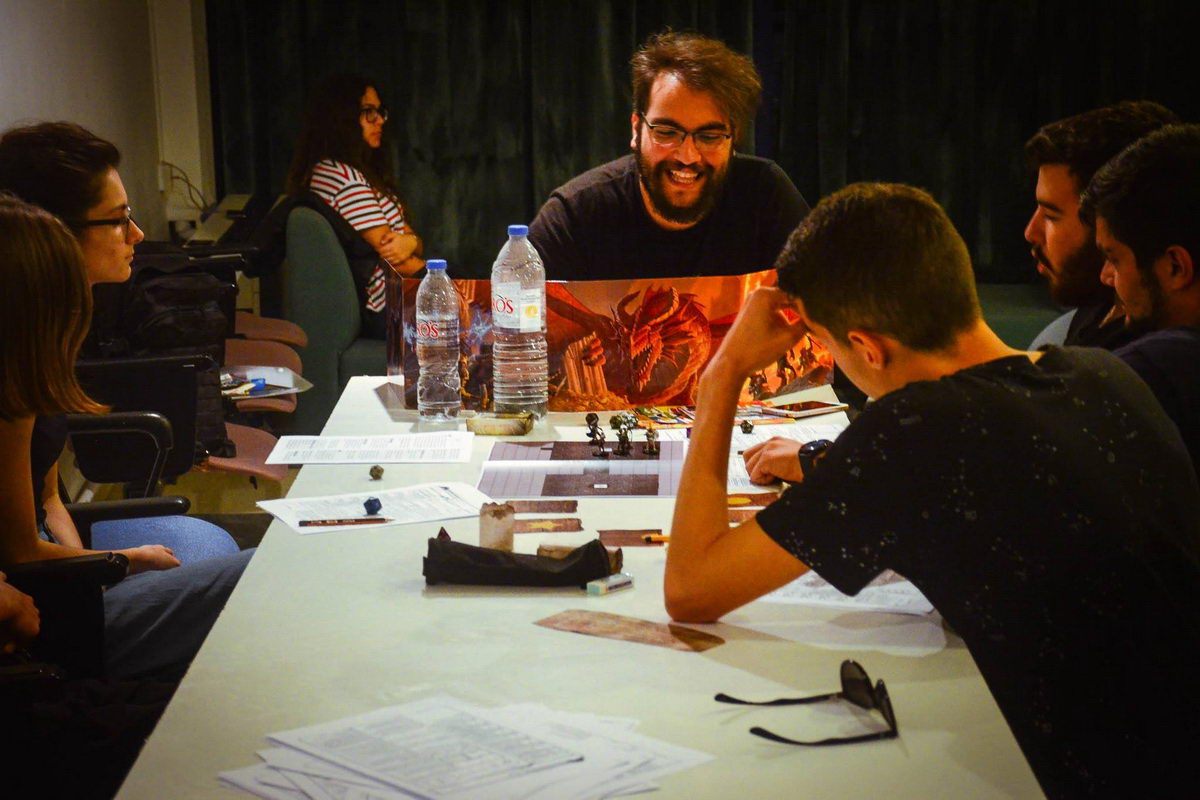 I would like to express my wishes fora all this unprecedented situation we live through to become a thing of the past, so that we can be together again, not only at Cretan Comic Con, but at all festivals in the country, big and small ones! 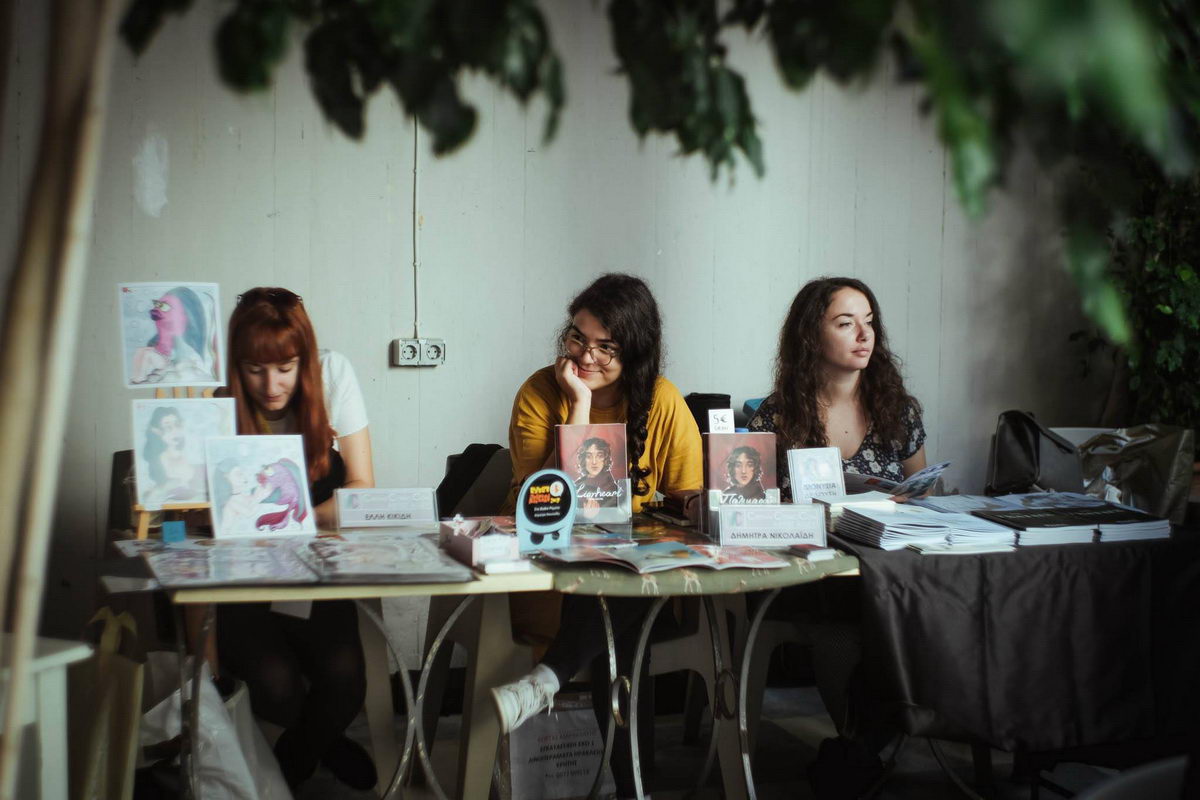 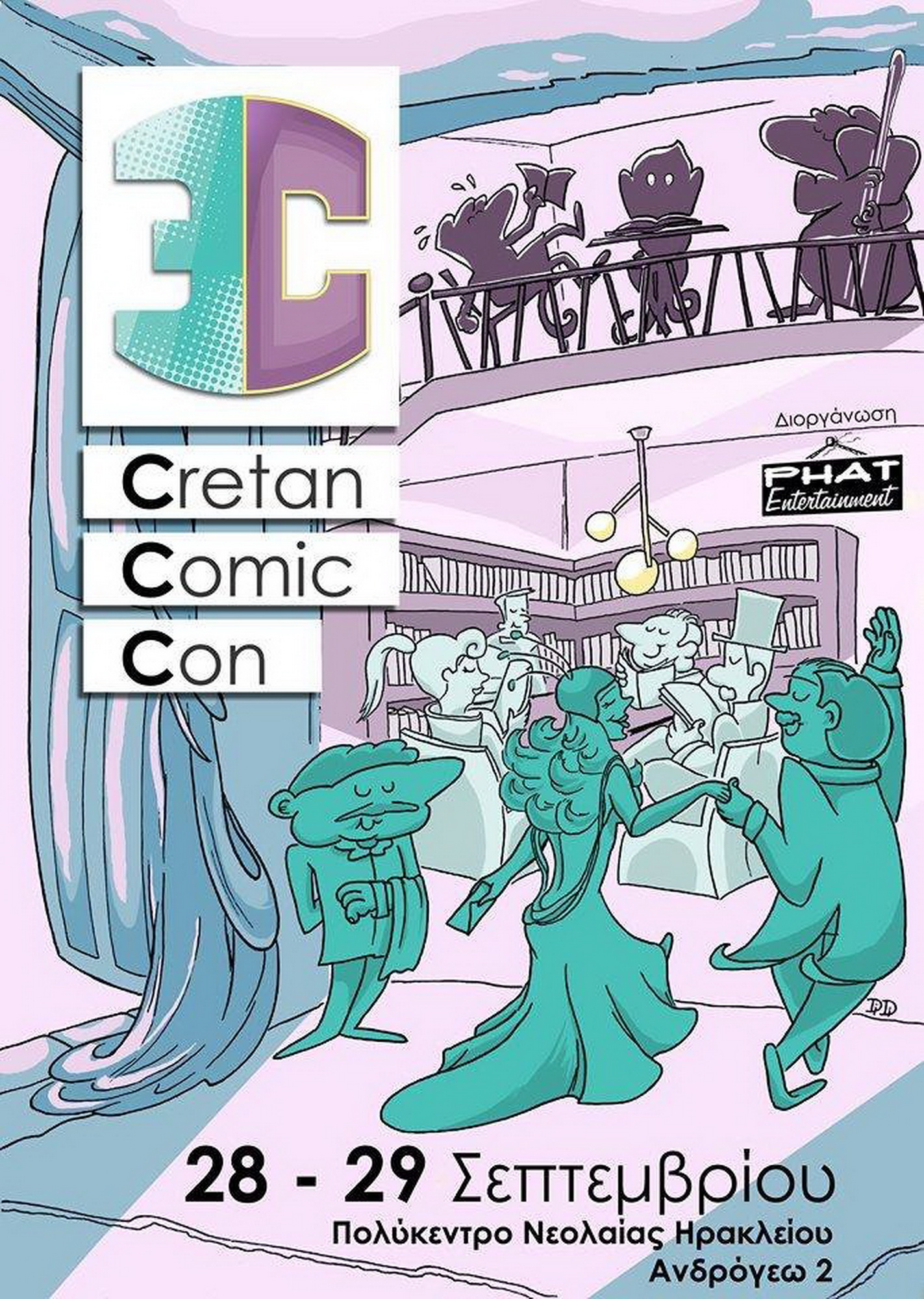