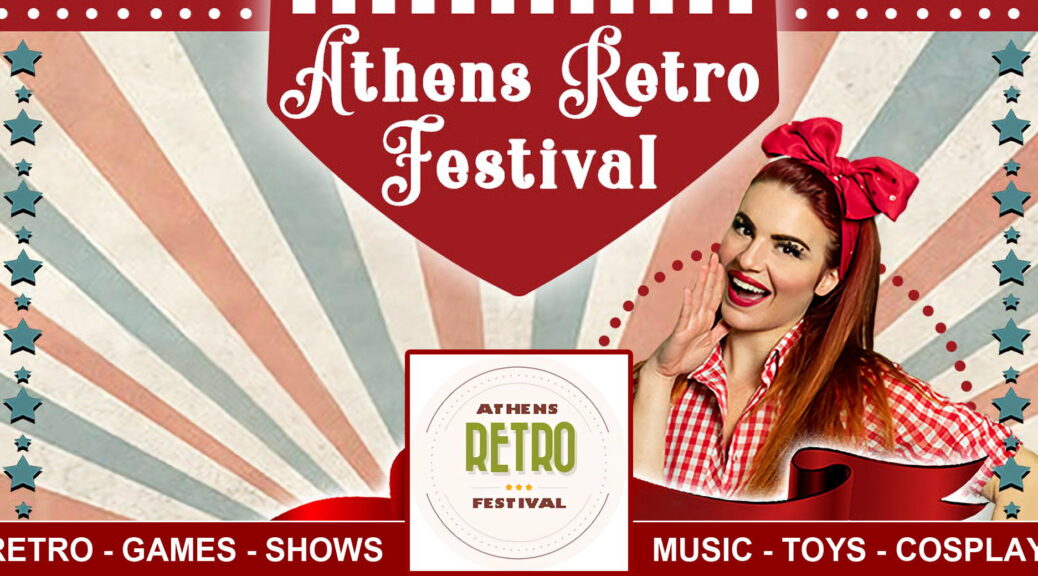 Athens Retro Festival! The entire nostalgic world of all previous decades in a big Festival in Athens, Greece! We talk about Cosplay, the event and its work!

Starting on July 29, 2016 at Old Car Station OSY, it counts four annual events by now, with the exception of 2020 and 2021, due to the pandemic! Themed retro booths, old comics, retro videogames, retro toys, retro items, classic vehicles, period costumes, exhibition collectibles, vintage clothes, vintage accessories, vintage decorations, vintage hairstyles, manicures, beard care and more, are there to be found! Every year more than 8000 visitors flood the event, filling the corridors between many exhibitors!

Parties, shows, dj sets, music bands, dance schools, interactive activities and much more compose an extensive program, covering all tastes a visitor might have! Complemented by a Cosplay Contest, starting in 2019!

Among them, our favorite Cosplays, which made their first appearance in 2019, reaching 14 Cosplays, at Athens Retro Festival 2019! Cosplayers//GR was there at the last event to fully cover all of its content and Cosplays. 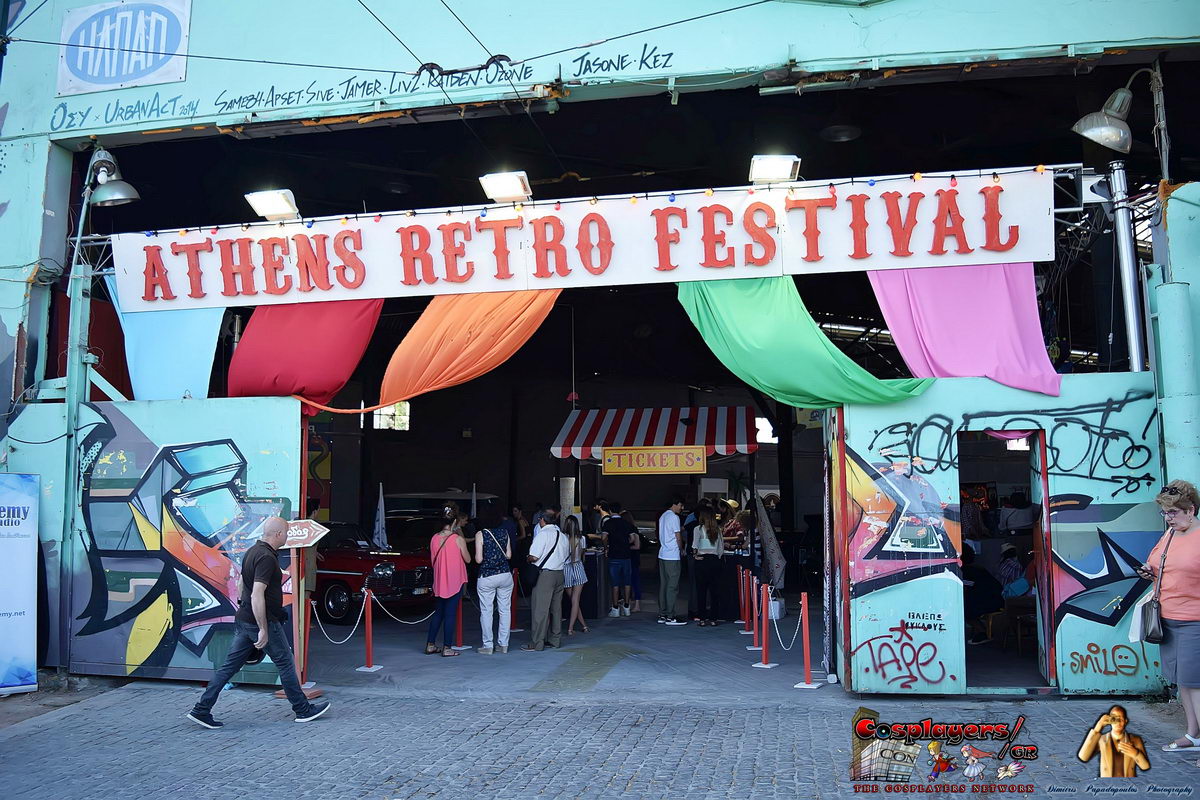 HAPPENINGS OF A PAST ERA !

1) Tell us a few words about Athens Retro Festival, its history and contents! When and how did it start? What themes is it about? Are those themes based on the organizers’ personal interests, and if so, when did you start taking an interest in each of them, before your first event?

Athens Retro Festival started 6 years ago by me and my partners. We decided to create a festival, different from existing ones, with a focus on entertainment, but above all on its educational character. After long discussions and thoughts, the idea of ​​Athens Retro Festival was born, based on solid foundations. And which are those? But of course the memories we all have from our childhood and we all look back to. Memories, whether experiential or narrative, are what defines us in our subsequent course in life. Athens Retro Festival’s success was based on them. In short, it deals with and represents past decades that have been lost over the years, as realistically as possible. None of the festival participants had any personal interests, for example being a collector or dealing with the sale of antiques or anything else that had to do with the festival’s themes. Everything was unprecedented for us and in a way, magical. 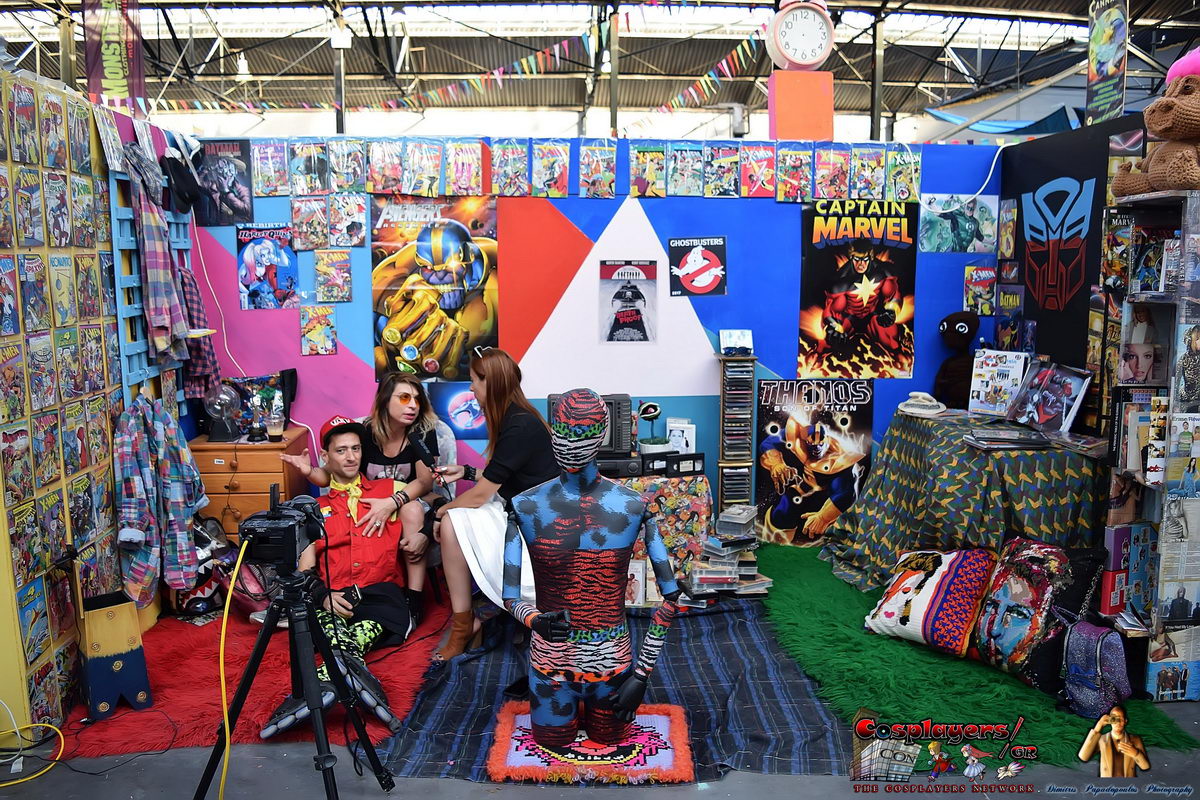 2) What led you to proceed with organizing Athens Retro Festival? How long and what exactly did it take until the first event was possible? What can one find there and how do you think it differs from other events of similar type or theme?

The first Athens Retro Festival took place right after the idea was conceived, after 8 months of hard work. For us, everything was new, since as I mentioned above, we had nothing to do with the festival’s themes. The ideas on how it could be implemented were many. And many were the difficulties we encountered too. But with lots of perseverance and patience, we made it. I can’t say, compared to other events, what difficulties one may encounter, because they vary and are numerous. Indicatively, I will mention that we’re dealing with objects that aren’t easy to find in today’s everyday life. For example a 1950s car. 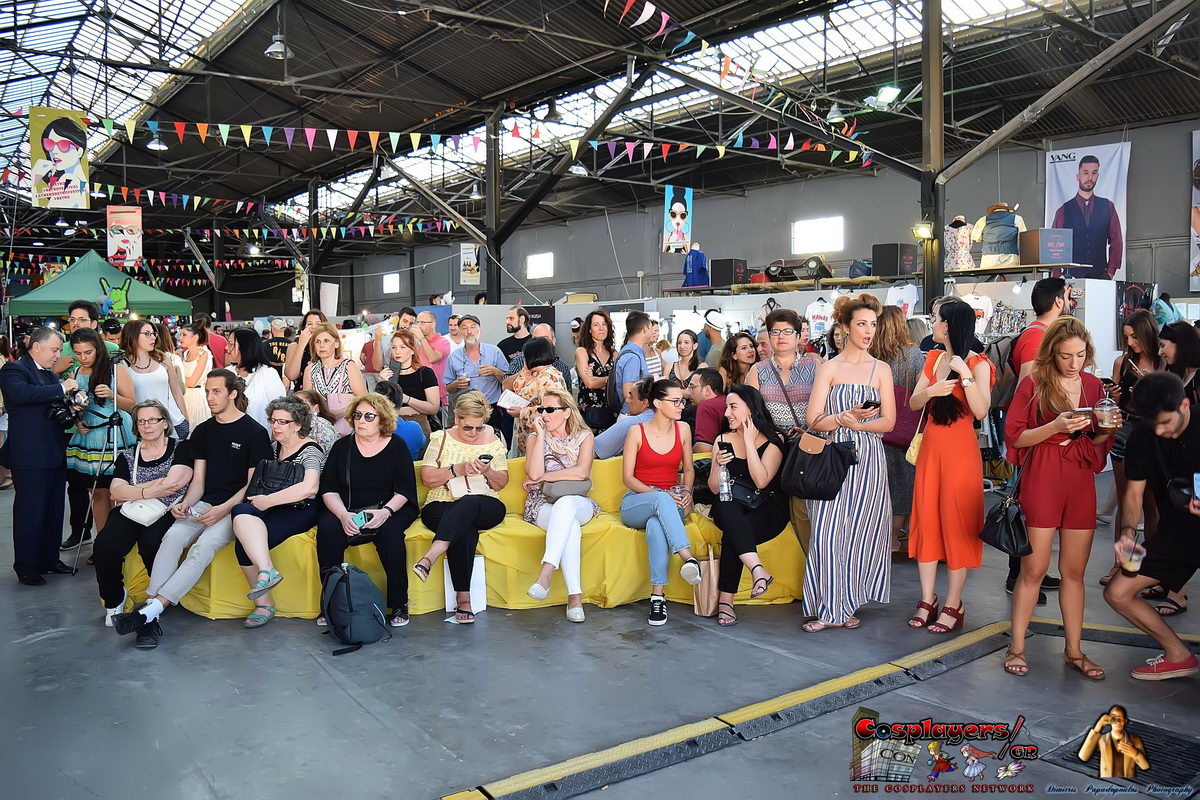 3) What was the biggest, but also the most difficult Athens Retro Festival you have done so far? What defines them as such?

I can confidently talk about the smallest one, which was our first one, in every aspect. We were able to cover only 2100 sqm of the total space, which was 4722 sqm. However, this changed radically in the following years, with this huge space seeming very small by now. The last one, taking place in 2019, was the biggest one and its requirements were clearly many more. 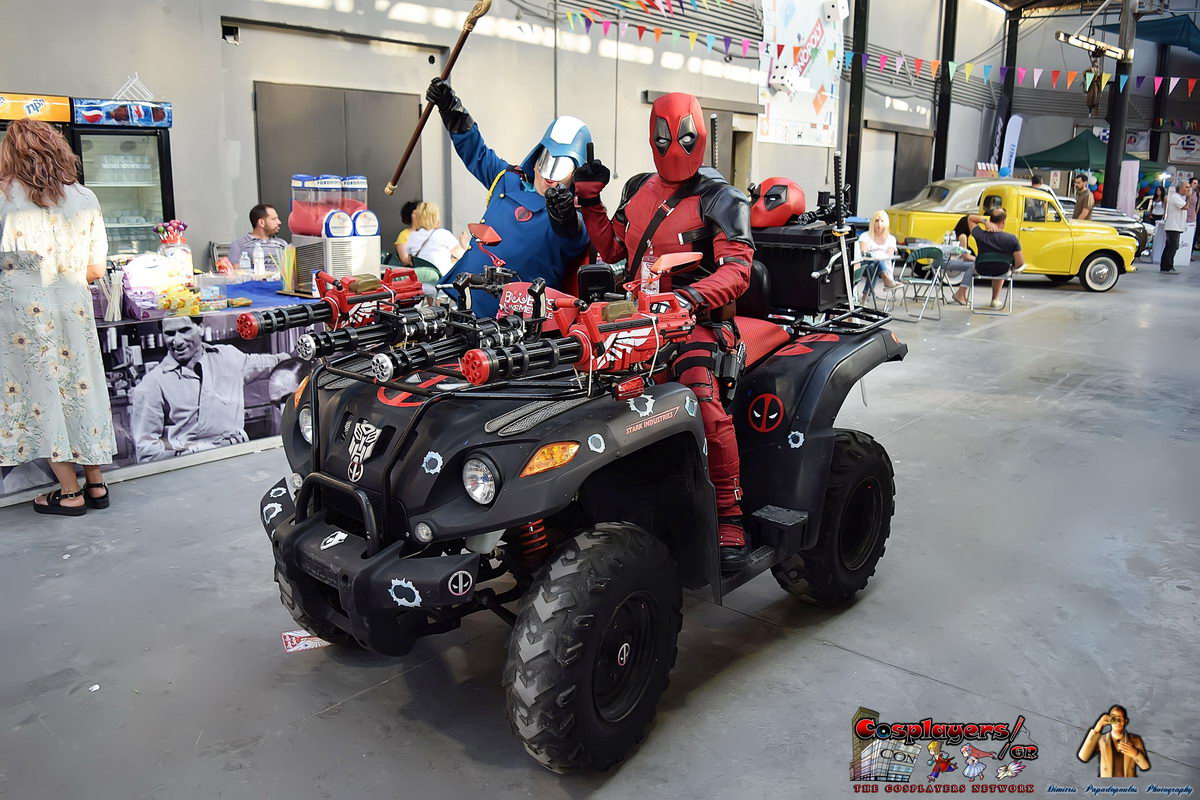 4) How much effort, time and money does it usually take to set up Athens Retro Festival? What is the usual preparation plan that you follow?

Difficulties are many and always exist. As long as they exist, the effort to overtake them grows. The festival’s preparation time, which is annual, is around 8 months. The money required is a lot and every year the festival’s cost doubles, because expectations are getting more demanding year by year. The amount of things required of setting up such an event is huge and makes it impossible to analyze. A strategy is followed, which changes each time depending on the circumstances. 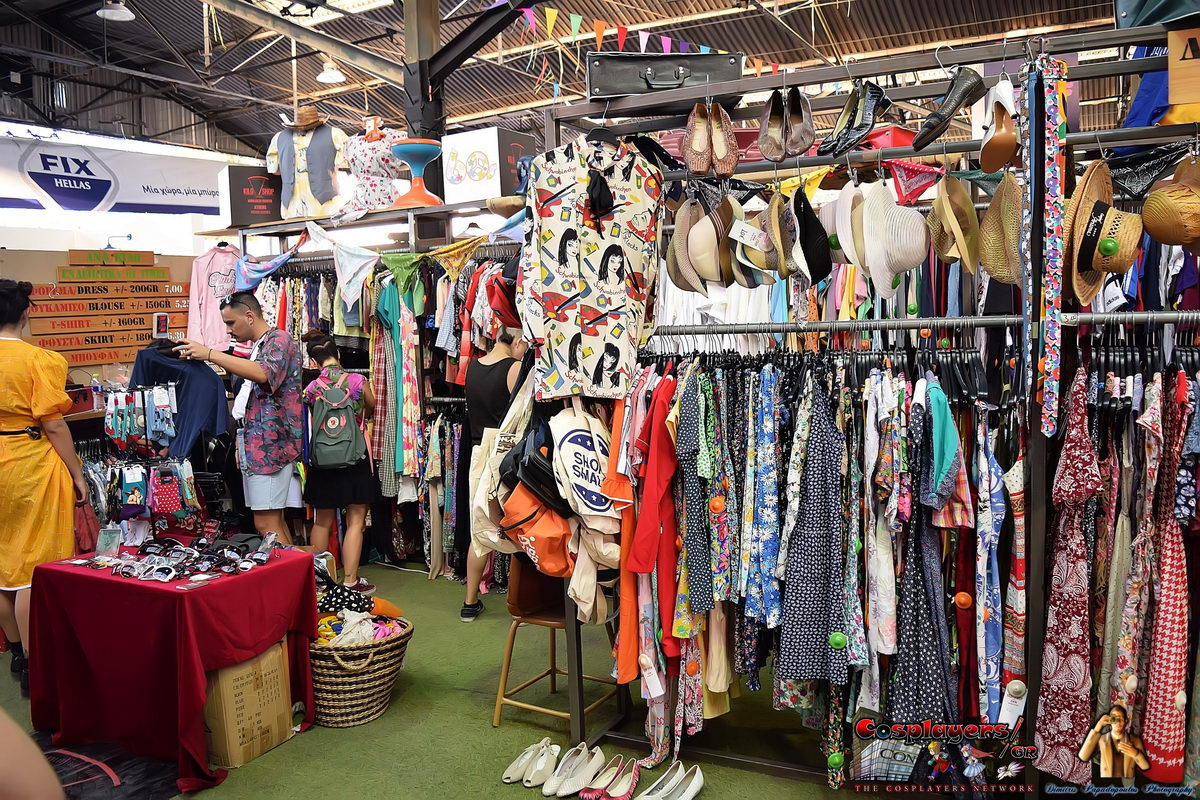 5) How did you feel during the first Athens Retro Festival and how after its end? Describe this experience to us.

It was a wonderful experience both during its implementation and after its end, with many emotional ups and downs. Disappointment followed joy and this was something happening constantly, before the festival was held, while trying to find the right contributors to work with to make the first Athens Retro Festival a reality. After the end of the event, the audience’s positive comments on our first attempt filled us with lots of optimism and greater willfulness to work on the next Athens Retro Festival, and gave us a prominent place in the scene of festivals. 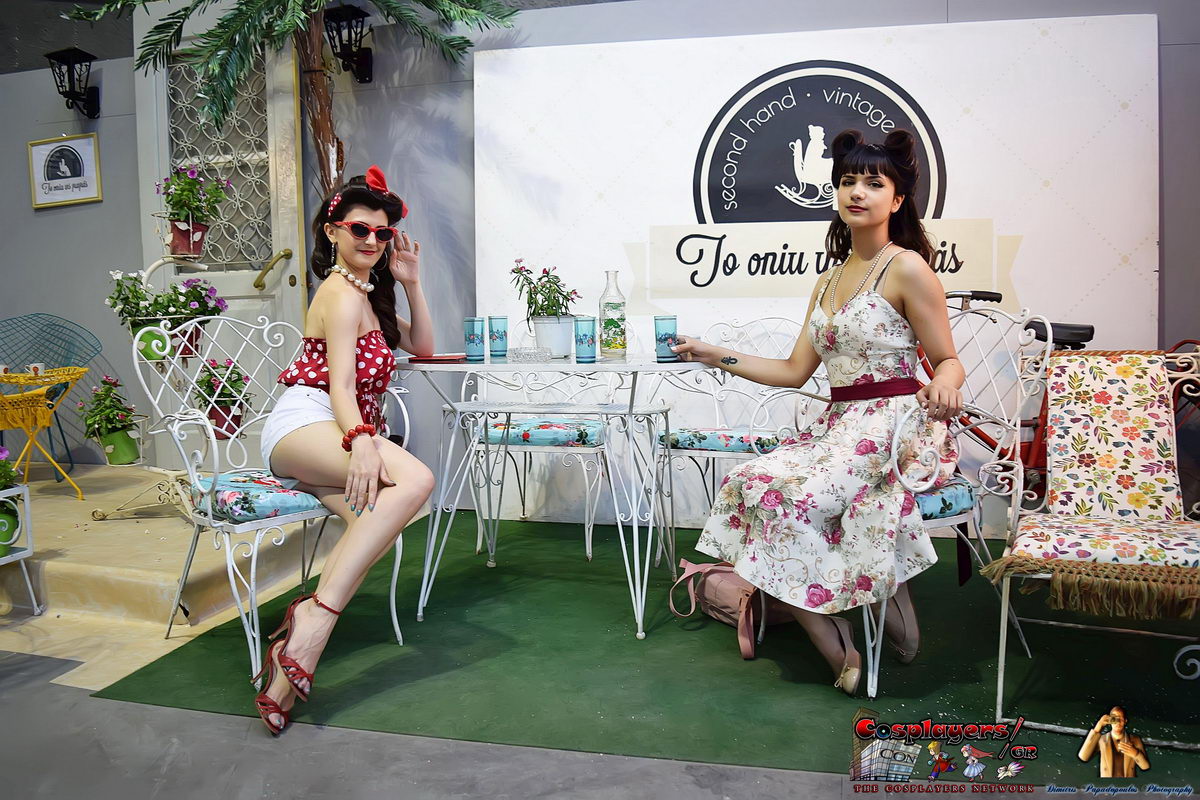 6) What’s your opinion, in proportion to Greece’s size, about the size and level of the audience of the scene towards which Athens Retro Festival is addressed?

The audience’s dynamic is very great, which is something that excited us! The target group we expected to see, starting from the first festival, was 35+ years old. But we were wrong in a positive way. We saw all ages embrace Athens Retro Festival and getting excited with its themes. 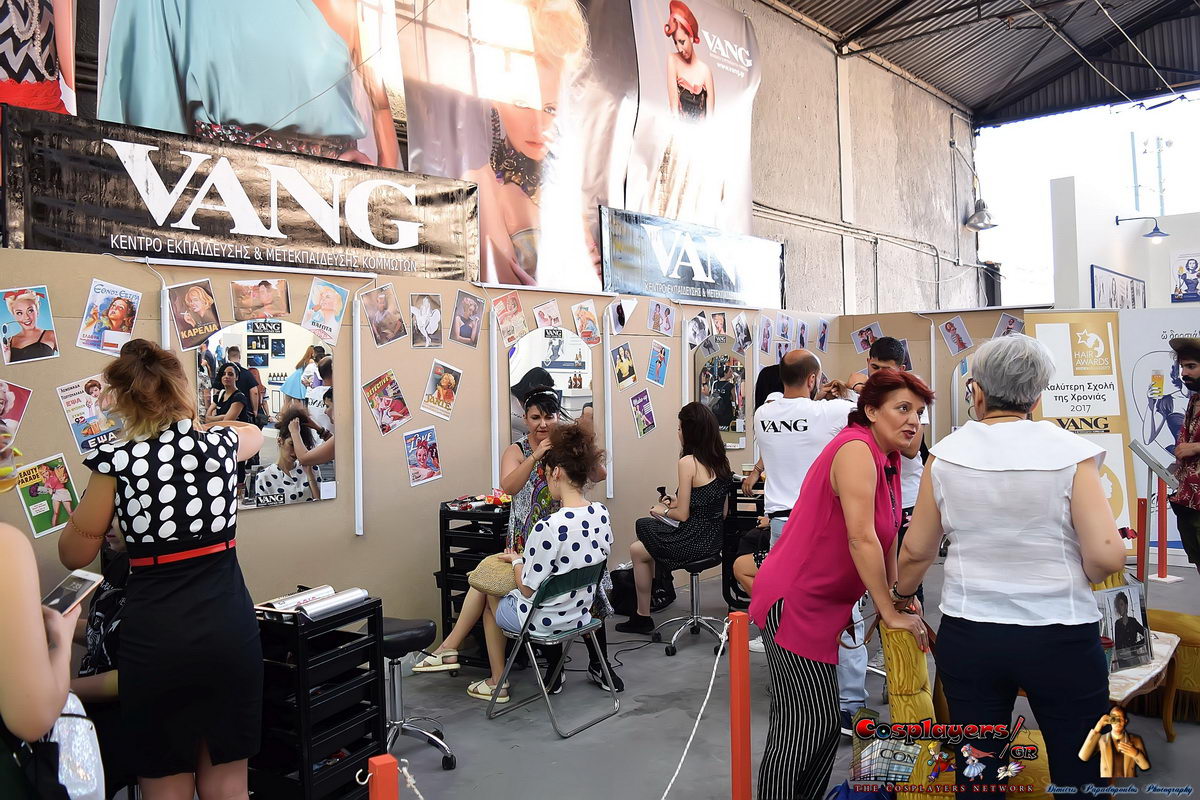 7) Are you satisfied with the people’s response to Athens Retro Festival during all these years, as well as with the number of Cosplays attending?

No organizer will ever say to himself, if we want to be honest, that he’s satisfied with the public’s response. He’ll always want more people to visit his festival, to see what he has built with so much effort. Next year will be a festival, set up in a different way, and that’s how things should be. The theme remaining the same, but its image constantly changing. At this point, I would like to express my gratitude to Vicky and Nikos from Fotogames Specialists who brought me in contact with this wonderful world, the world of Cosplay. I would also like to thank all Cosplayers who attended Athens Retro Festival and created wonderful vibes with their dynamic and strong presence.

Athens Retro Festival’s theme is clearly related to previous decades. Meaning everything that existed before the present time. Naturally, Cosplay fits perfectly in our festival, since it has its own history. Every superhero has existed and evolved over the years. The presence of the Cosplays at Athens Retro Festival added a new section to the ones already existing in the festival. 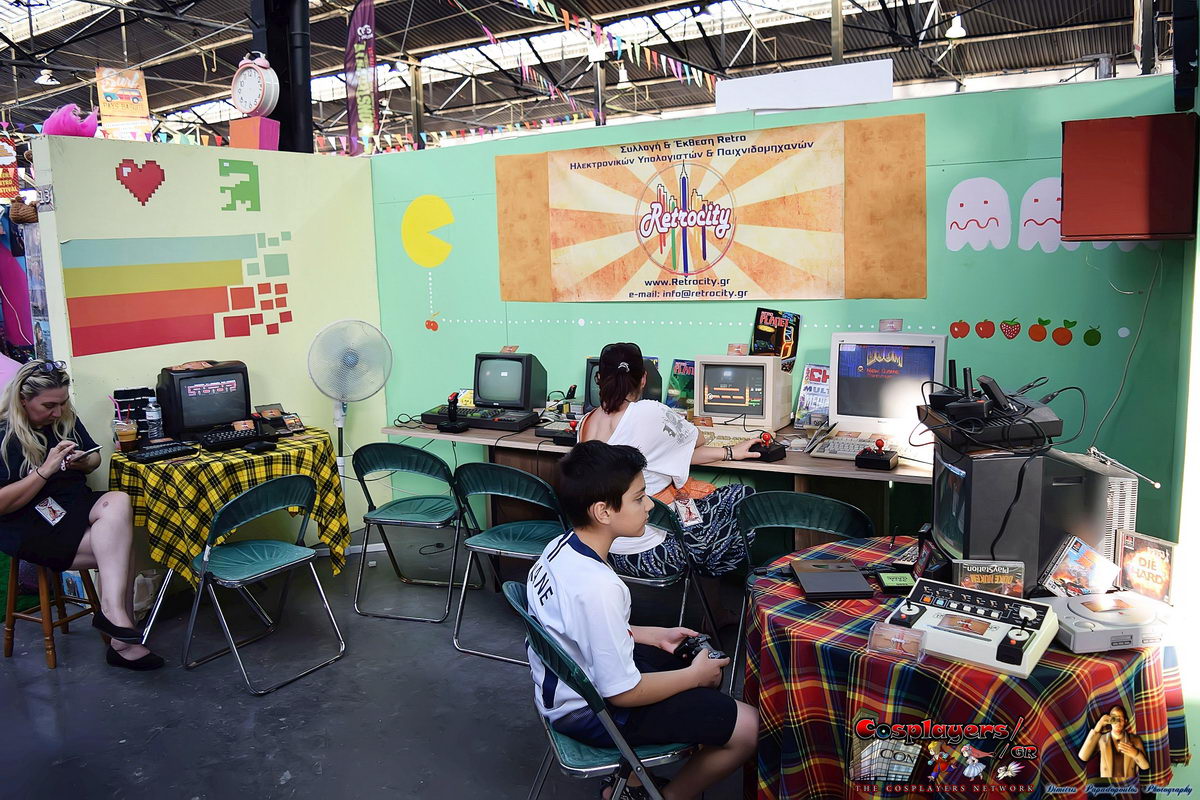 I wish this new section, which we first met at our festival in 2019, will continue to exist. There are many beautiful ideas around activities and events that could be added to Athens Retro Festival, but it’s too early to mention anything right now, since even the inclusion of a new section requires a lot of studying and discussions so that we can achieve the best possible results. One thing is certain, the next Athens Retro Festival will be ready to welcome the world of Cosplay again. 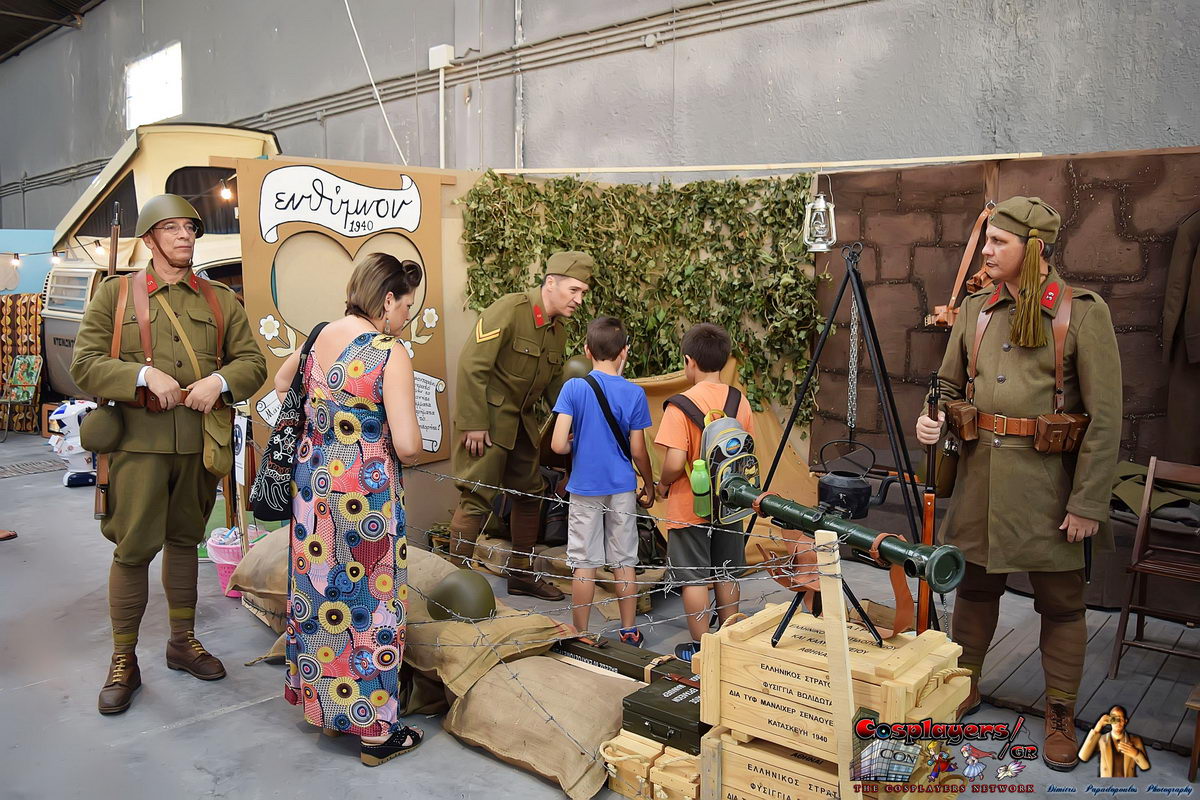 10) Is there a long term goal or personal dream you want to achieve through Athens Retro Festival?

There are always goals and dreams, and it would be bad if they ceased to exist. Our goals and dreams are to be able to return stronger and more prepared to offer the best possible results to the public. 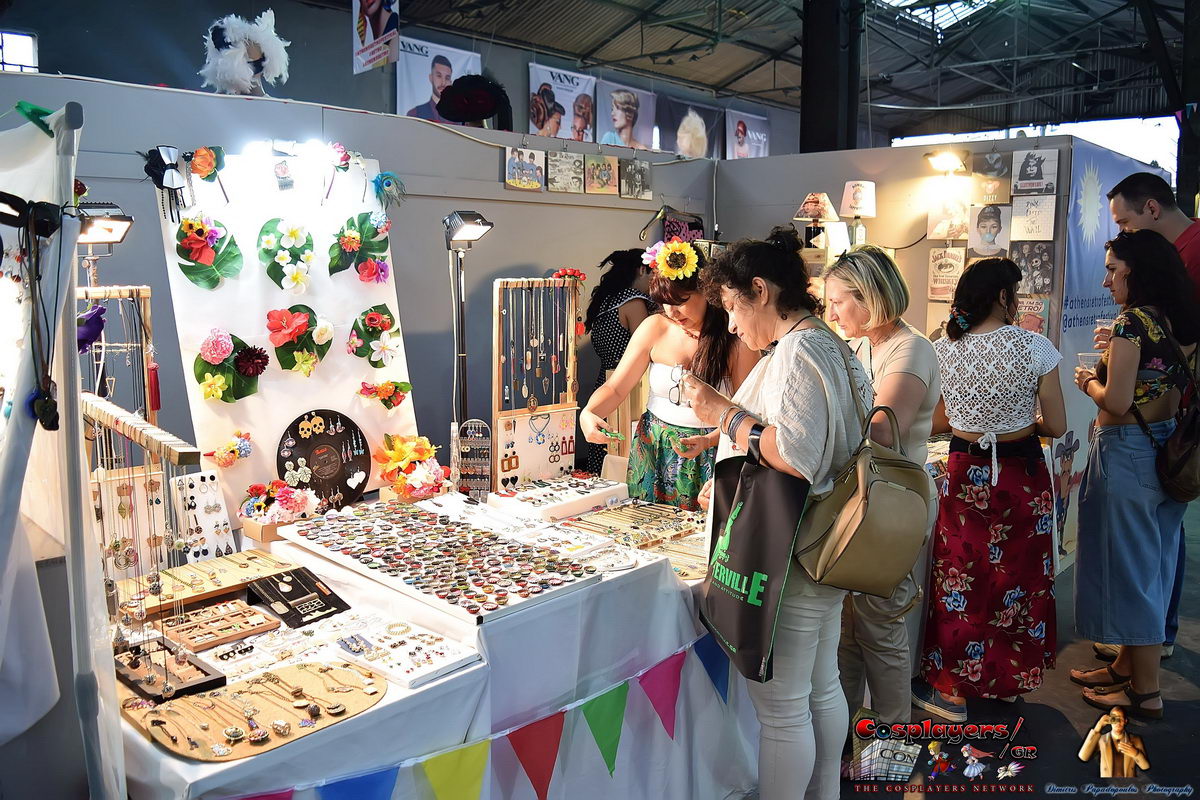 11) Is there any important or funny experience that happened during Athens Retro Festival that you will never forget?

For me personally, all the collaborations we made for the Athens Retro Festival are important experiences. Indicatively, I will mention the National Theater of Greece. A collaboration that took place in 2018. There were many funny experiences. But I’ll mention a situation that took place in 2017 during Athens Retro Festival: a large Dutch channel with Leontine Borsato as a presenter and actor Kees Tol and internationally renowned musicians Nick & Simon ( Nick Schilder and Simon Keizer ) as guests, asked to be filmed inside the festival for the show “Talenten Zonder Centen” and the scenes that unfolded were really very funny and beautiful. 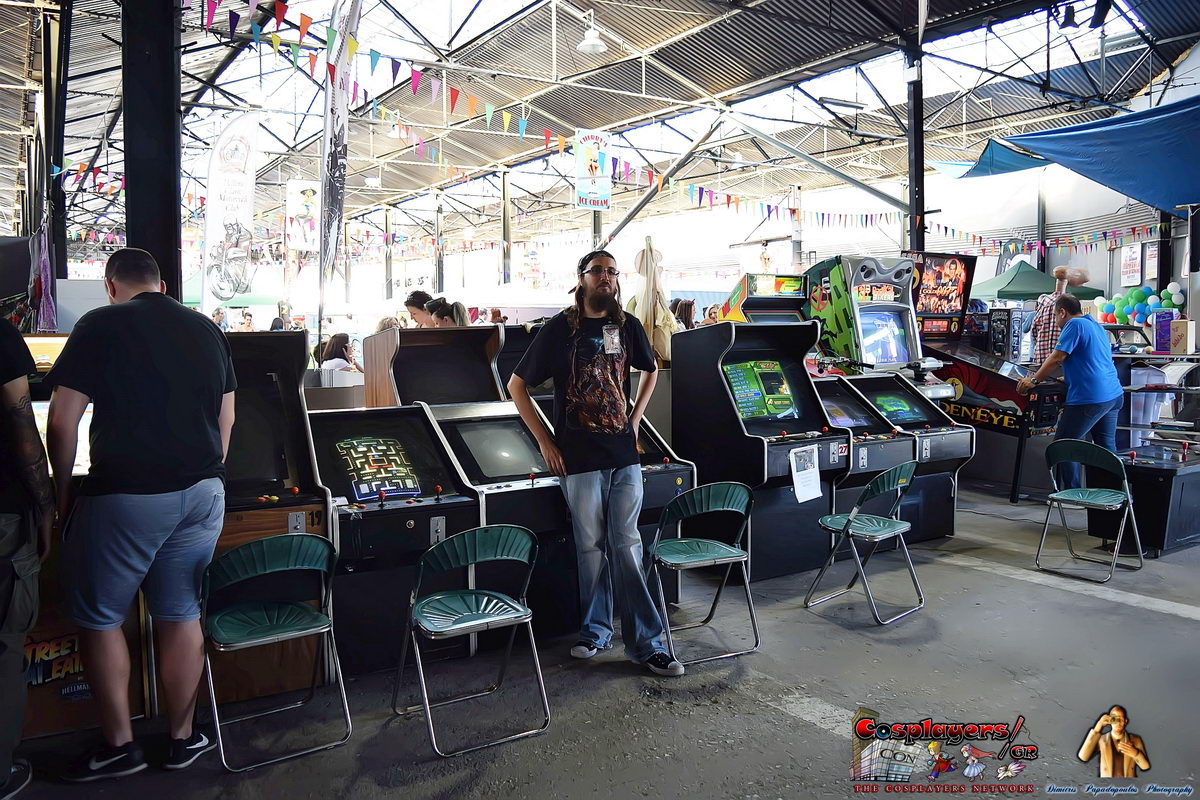 12) What is the first thing you would tell to someone who seriously considers visiting Athens Retro Festival for the first time? And what can he expect to see there in the future?

I would tell him to definitely bring a digital camera with him or a mobile phone, because a visual spectacle is going to unfold in front of his eyes. Athens Retro Festival has many themed booths that take us to another era. It’s worth noting that every time the festival is held, social media ( Facebook, Instagram etc) are filled with photo and video material by the audience itself. I would also suggest visiting us on our website, as well as on Facebook and Instagram. Because a picture is worth a thousand words. In the future, anyone coming to Athens Retro Festival, will be able to take a trip into the past. 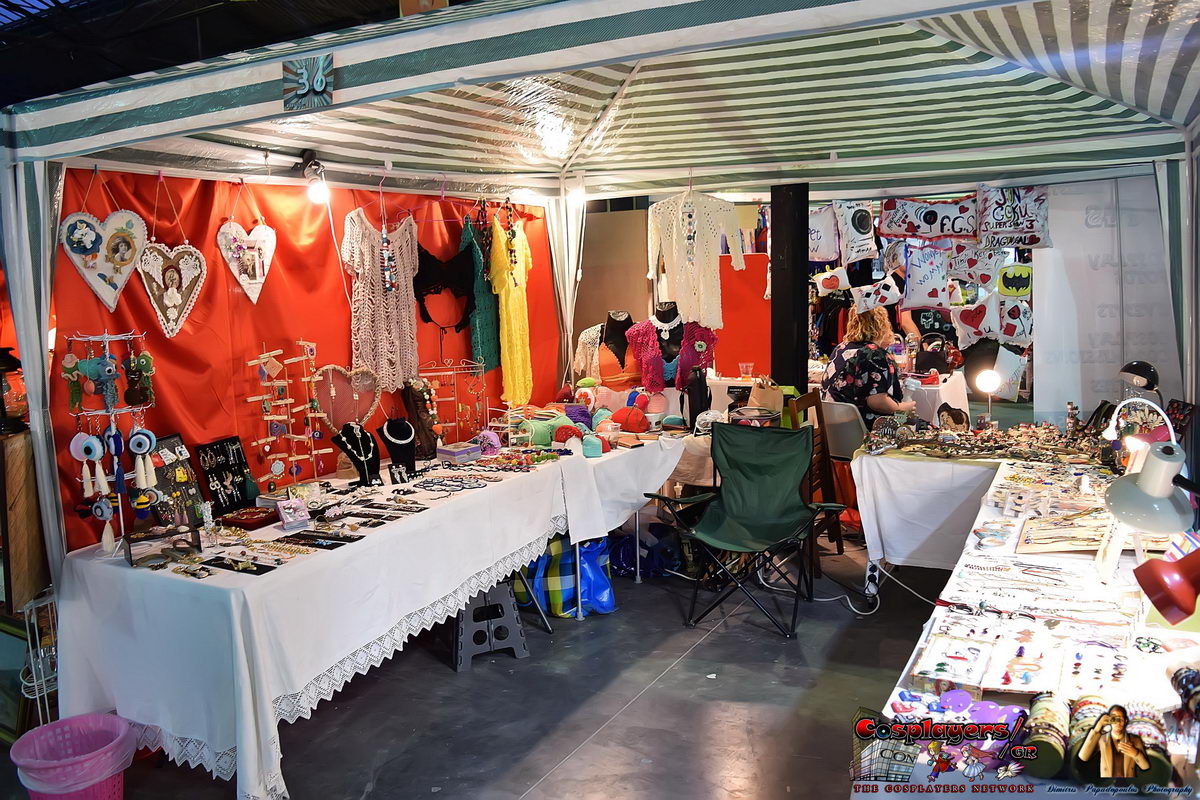 One thing that I would like to share with your readers is that they should have dreams and make them come true, no matter how hard they might seem, and never stop setting goals for themselves. 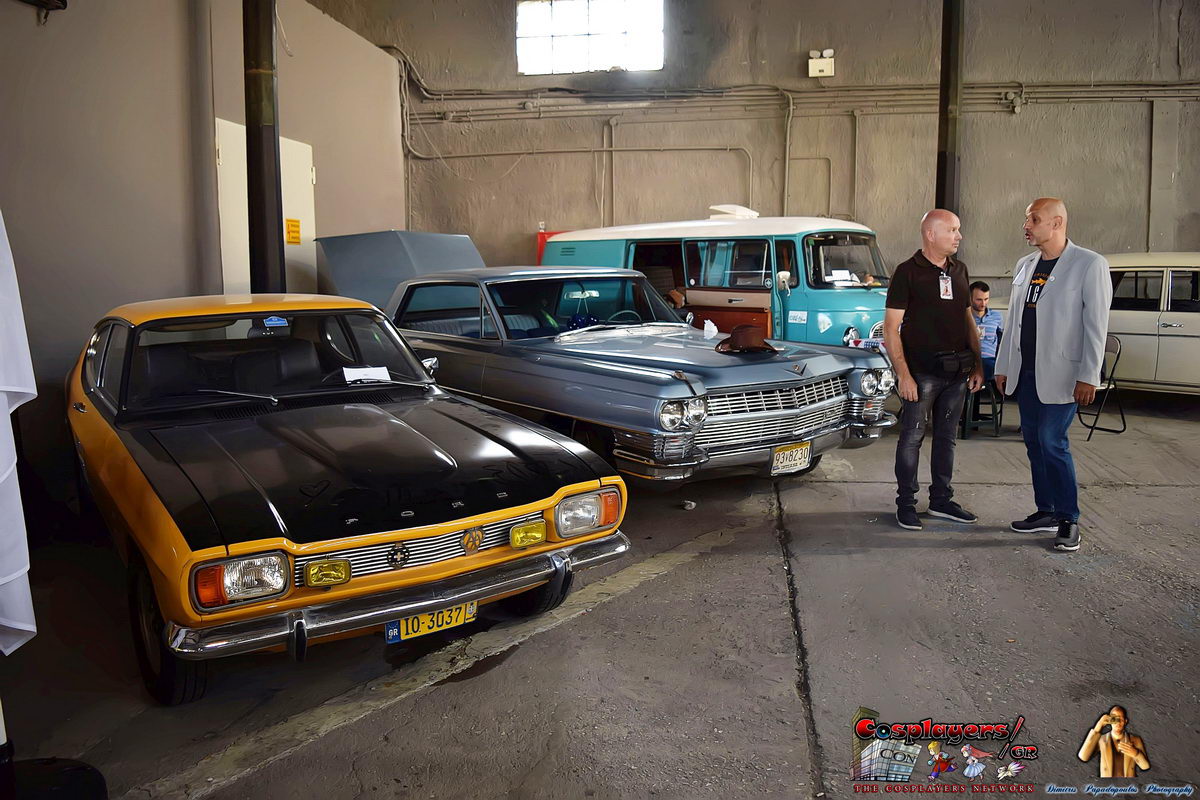 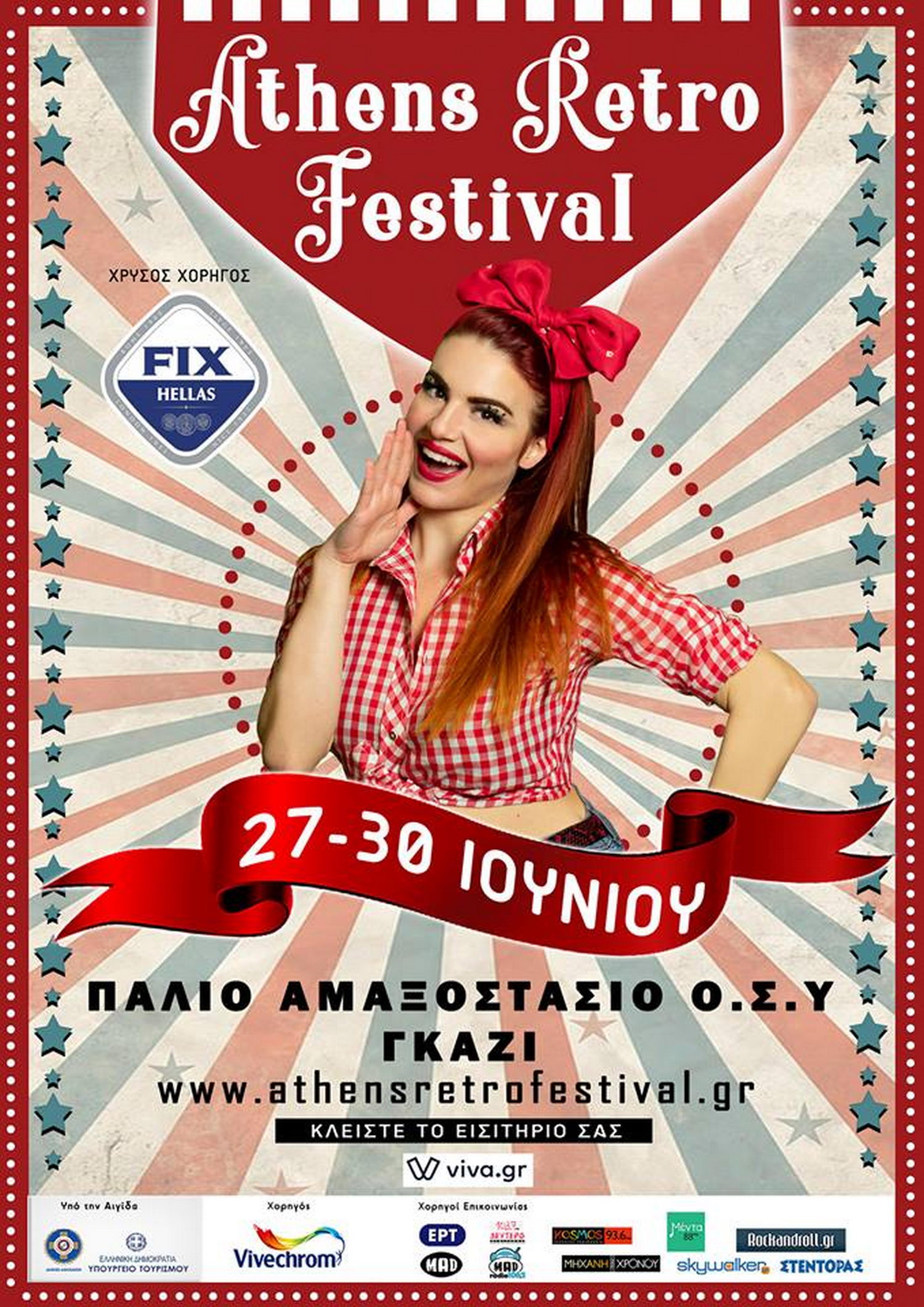