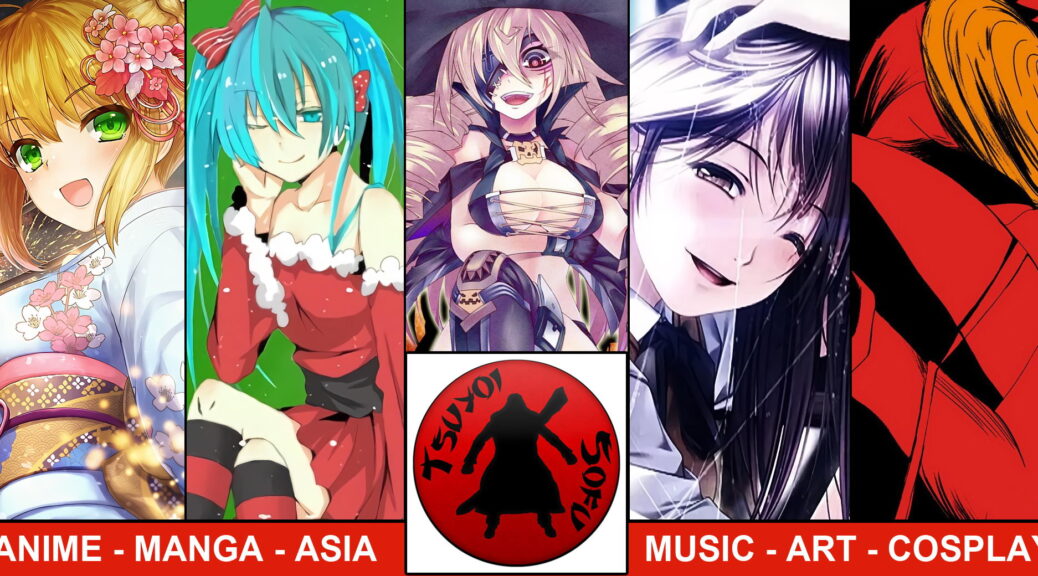 Heraklion in Crete, Greece has its own Asian culture community! Tsuyoi Sofu! We talk about their Cosplay Parties in 2012-2014, their team and much more!

From the end of 2012 until the end of 2014, Cosplay in Heraklion, Crete, Greece, but also in all of Crete, was synonymous with one name! Tsuyoi Sofu, the only Anime / Manga / Asia community in the city, with over 250+ members!

Starting on July 11, 2011 as a Facebook Group, it initially focuses on regular meetings by the group’s members, themed around anime / manga and videogames! On September 7, 2012 it continues with its first Cosplay Party, which is followed by five more Cosplay Parties up until November 2, 2014! Their core features were the Cosplay Contest, card game tournaments, art and script competitions and of course many giveaways!

It was the 2nd of the 4 consecutive Cosplay event organizers of Heraklion in Crete, Greece, covering the period 2012-2014, holding all its events, except the last one, at Papercut ( now Cybercut ), which was chronologically the first organizer of Cosplay events in the city, and which it succeeded!

Let’s talk about everything with Nick Stavroulakis, founder of Tsuyoi Sofu! 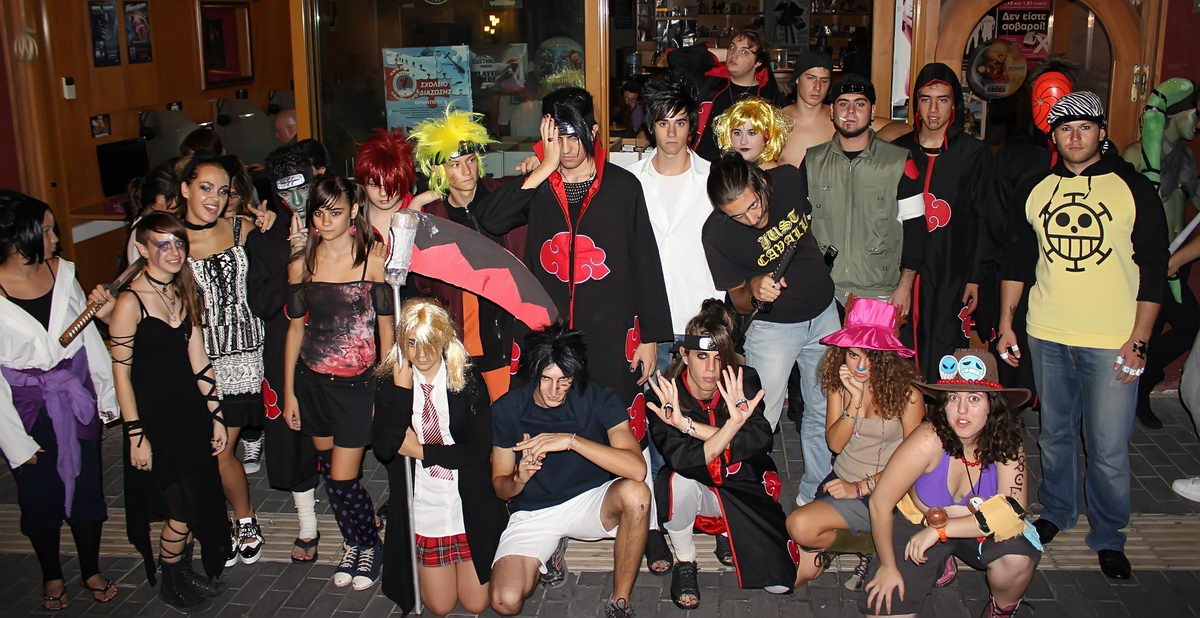 PARTYING TILL YOU DROP !

Tsuyoi Sofu ( roughly translating to Powerful Grandpa ) was created for fans of anime, videogames and such in my inner circle of friends, with the purpose of mostly doing home gatherings and have fun. After two to three gatherings, word started spreading, so I thought why not try doing something like a meeting aimed at everyone in Crete, which would include Cosplay and happenings, and see what we could accomplish. This is how the first Cretan Asian Culture Fan Club event came to be. After that, I started getting a lot more ideas about things I wanted to do and we started organizing Cosplay parties at Papercut ( currently Cybercut ), as well as weekly meetings to socialize, talk about anime and manga, play videogames and eat at our favorite Asian restaurant.

What drove me to pursue this type of event? The sheer willpower of never surrendering. I was bullied and ridiculed extensively for what I loved by lots of people while growing up, as well as while having grown up. I remember everyone having to change into their Cosplays at the venue we had our activities, to avoid the risk of getting bullied by thuggish people who were making fun of us! What changed that? I gathered all Cosplayers and people that visited our event one night and went for a stroll passing through the busiest streets in Heraklion ending up in the city center, also known as Astoria plaza. Many people who knew about anime were present and recognized the characters we were cosplaying. Many people took photos with us and shared them online, leading to a rise of awareness of what our small group stood for, so people started gradually accepting us. Until today, I consider that among my proudest moments in my life! 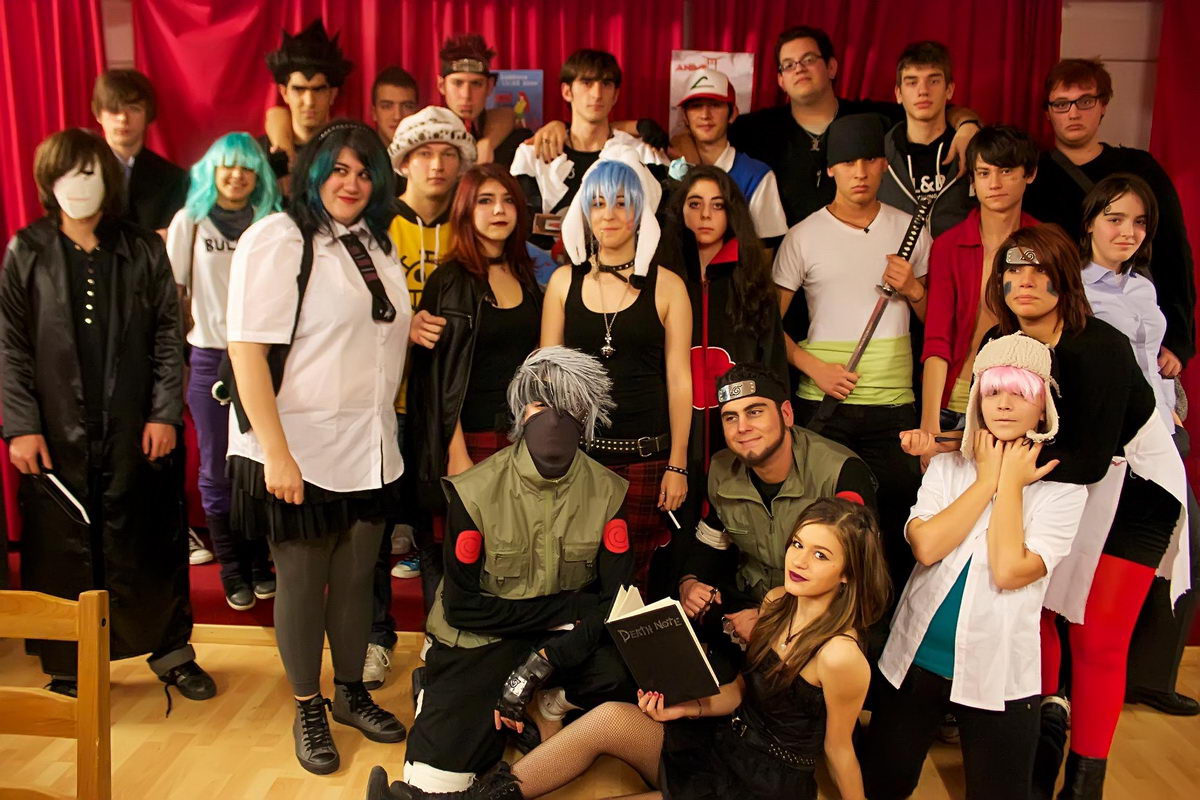 2) How much effort, time and money did it usually take to set up an event? What was the usual preparation plan that you followed?

A lot of work had to be done for each event we were organizing. I had to put a lot of my personal time into finding sponsors, finding an actual venue to host the events and deciding on an actual date. As for money required, thankfully the owners of the venues were from the beginning keen enough to provide their place to us during one of their more relaxed business days, so they could get more business that way.

God, I was filled with lots of anxiety and stress on how to talk to so many people, how to make sure everything was going fine and hoping not to subject anyone to any kind of negative experiences, so they would join us again if we were going to do more events in the future. I remember having to shoot photos in a back alley due to some people making fun of us otherwise! However, it all turned out just fine. In the end, everyone was happy and that prompted me to organize further events leading to more than 2 years of successful events. 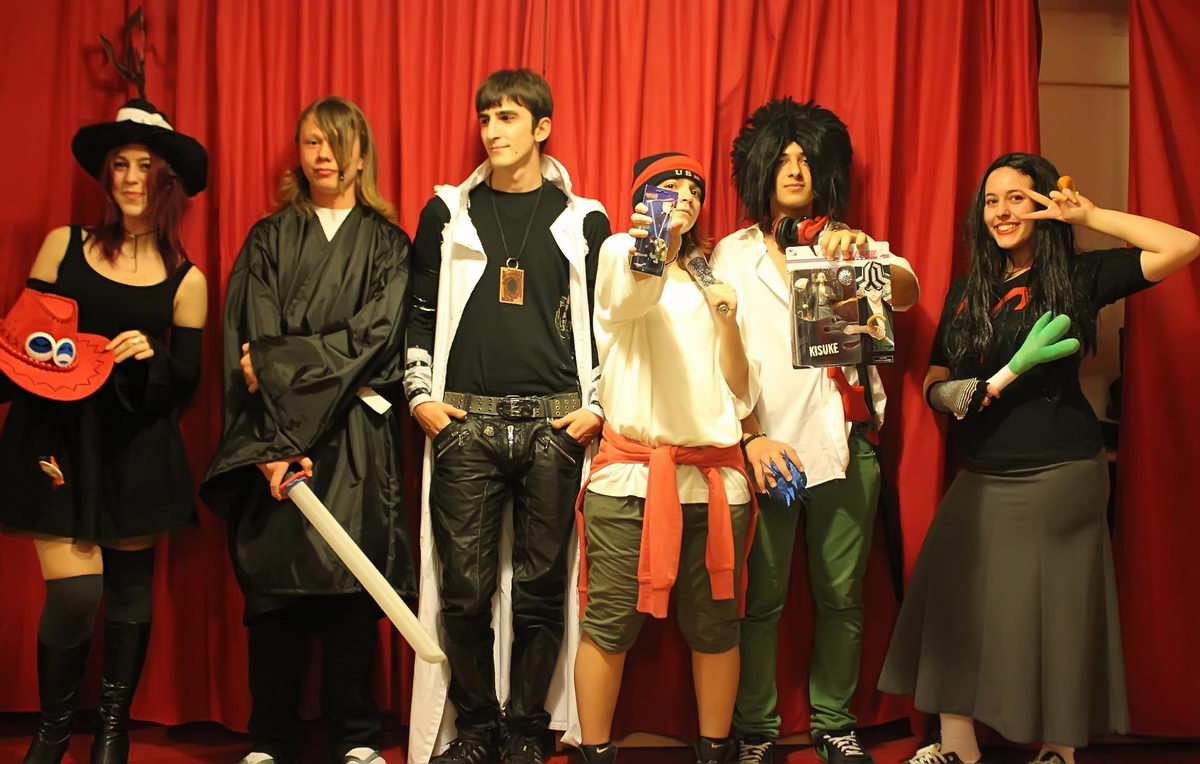 4) What was the most difficult event you organized? What defined it as such?

The hardest event of all was the last one I organized before leaving Greece to move to the UK. I wanted it to be an amazing and proper Cosplay party taking place at actual club! It took so much time searching for a proper venue and so many phone calls that it was crazy! Thankfully, a good friend offered her connections with a club and we managed to book a day for the event!

5) Were you satisfied with the people’s response to your events all those years, as well as with the number of Cosplays attending?

I was extremely happy and never imagined that there would be even 10 people attending our events. Our attendance peaked at the Tsuyoi Sofu Christmas Cosplay Party in 2012, with 80+ people attending at once! For me, that was mental! We had like 20 or so cosplayers, so many competitions and we even had our very own Harlem shake video made as well at a later event, which was a trend back then.

6) Was there a long term goal or personal dream you wanted to achieve through your events?

Yes, my long term goal was setting up the ground for the next generation of fans so that they would be able to organize their events in an easier way, as well as to raise awareness so that people that would follow wouldn’t have to go through the hardships I went through. Seeing how some of the events that followed ours were really successful brings me joy. Only a small group of people really knows what I had to go through back then and credits me. I also remember helping Chania Otaku Club with some sponsorships as well, so that they would have their own amazing events in Chania. 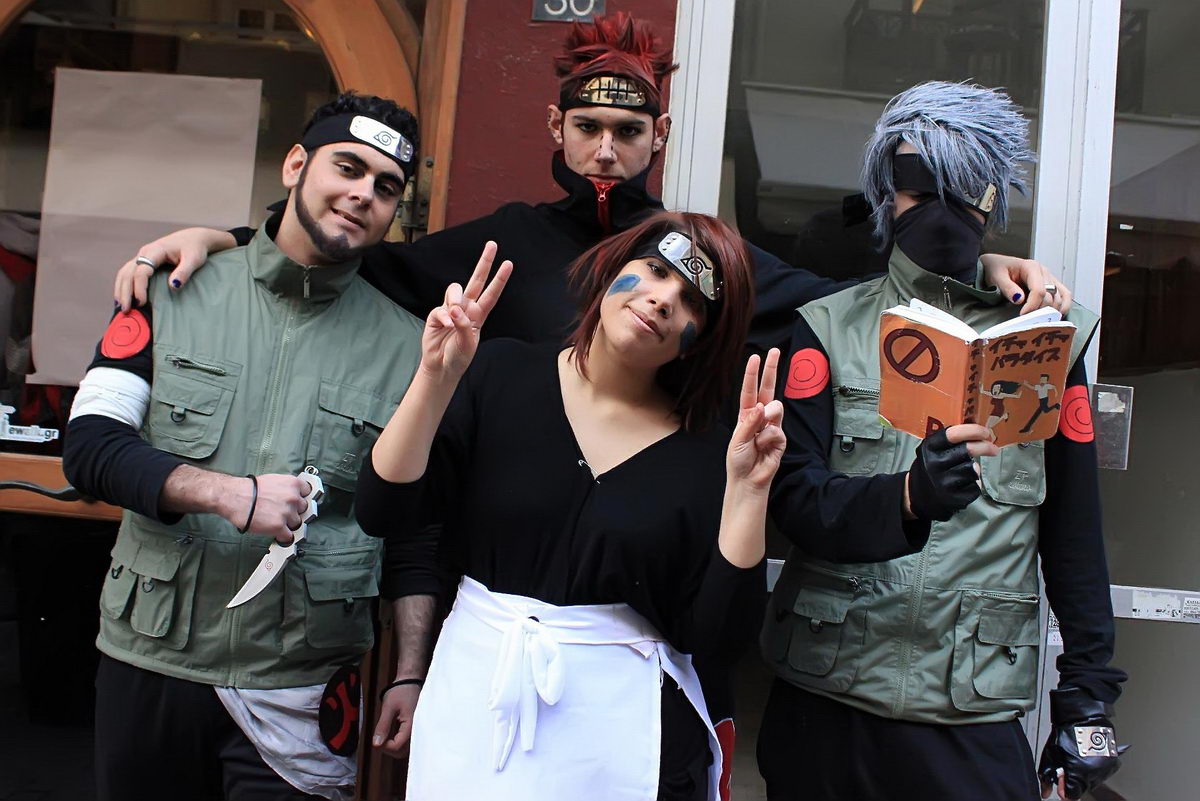 7) What’s your opinion, in proportion to Greece’s size, about the size and level of the audience of the scene, towards which your event was addressed? Comparing it to the present point of time, do you notice any quantitative and qualitative differences in this audience?

The size of the fan base is definitely bigger and stronger now. It keeps growing as fans keep spreading the word about anime and cosplay. I believe there’s more room for improvement for people who organize many of the events in Greece and I’m sure they will improve too! Being in the UK, I have attended a lot of conventions myself too ( related to videogames, anime, etc ).

8) Why did you decide to include Cosplay among the events’ themes from the beginning? What more do you think did the presence of Cosplay provide to your events?

Cosplaying is freeing! You can be someone else, which by itself makes you feel free! I admired cosplayers since I was really young and I loved all the cosplays I saw at the first event I attended in the UK when I was 15, so I was sure that Cosplay would have a big role in all my events, which is the reason I included it. 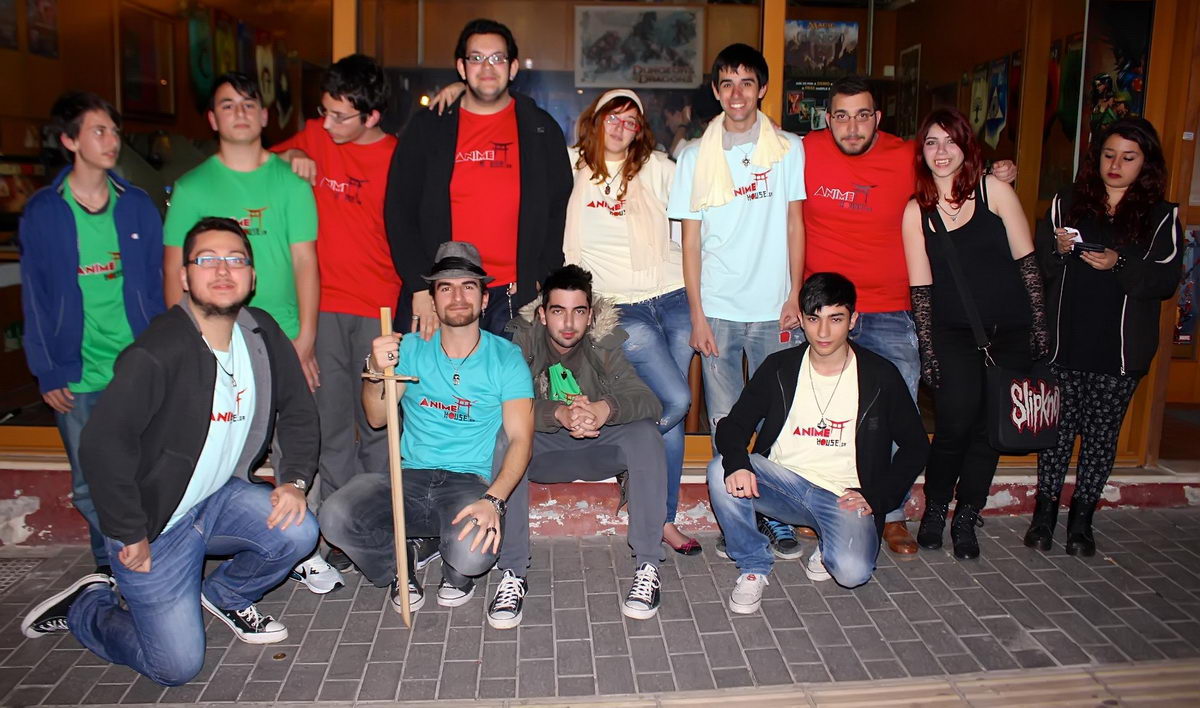 9) What could one find related to Cosplay at your events? Do you think they were sufficient or was there something more that you would have liked to provide regarding Cosplay, but never managed to?

I would have loved to have a better Cosplay contest at my events actually, but I never managed to get more people to enter the Cosplay contest sadly, since most cosplayers were too shy. 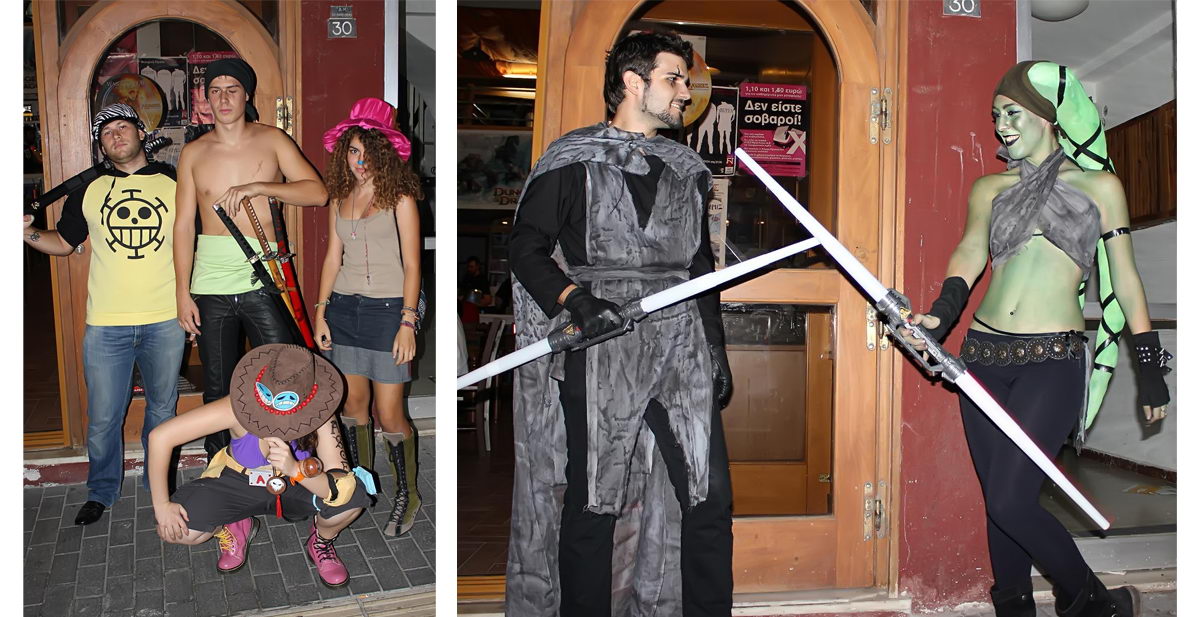 10) What’s your opinion, in proportion to Greece’s size, about the size and level of Greek Cosplays, based on what you know about it?

I think the size of the Cosplay scene we have in Greece is amazing! It’s definitely a bigger percentage compared to what I’ve seen in the UK when you take each of their populations into consideration. There are some really talented cosplayers in Greece and I’m lucky enough to have met them or to be friends with some of them. 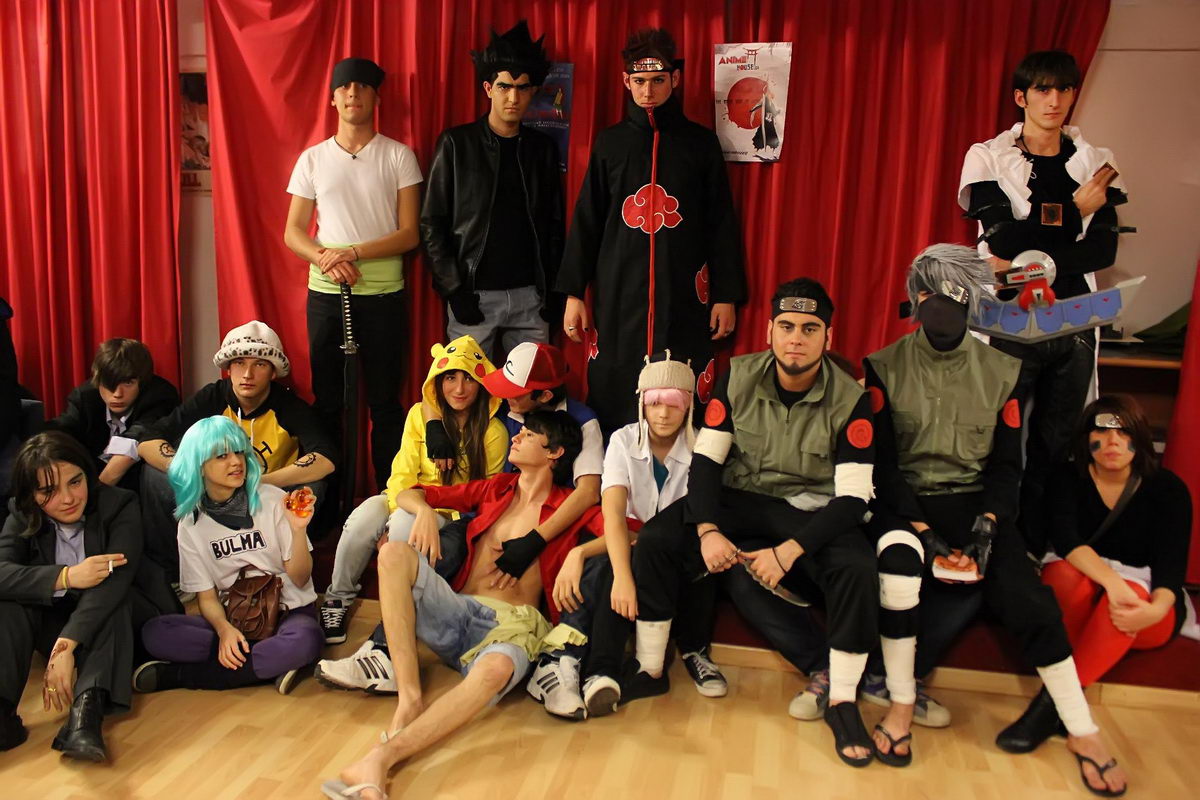 11) What led to the halt of the team’s activities in the end?

Sadly, I had to leave Greece in search for a brighter future, since finding work was impossible for me due to my size. It still saddens me to this very day having to stop organizing such events, but sometimes there’s just no other choice! 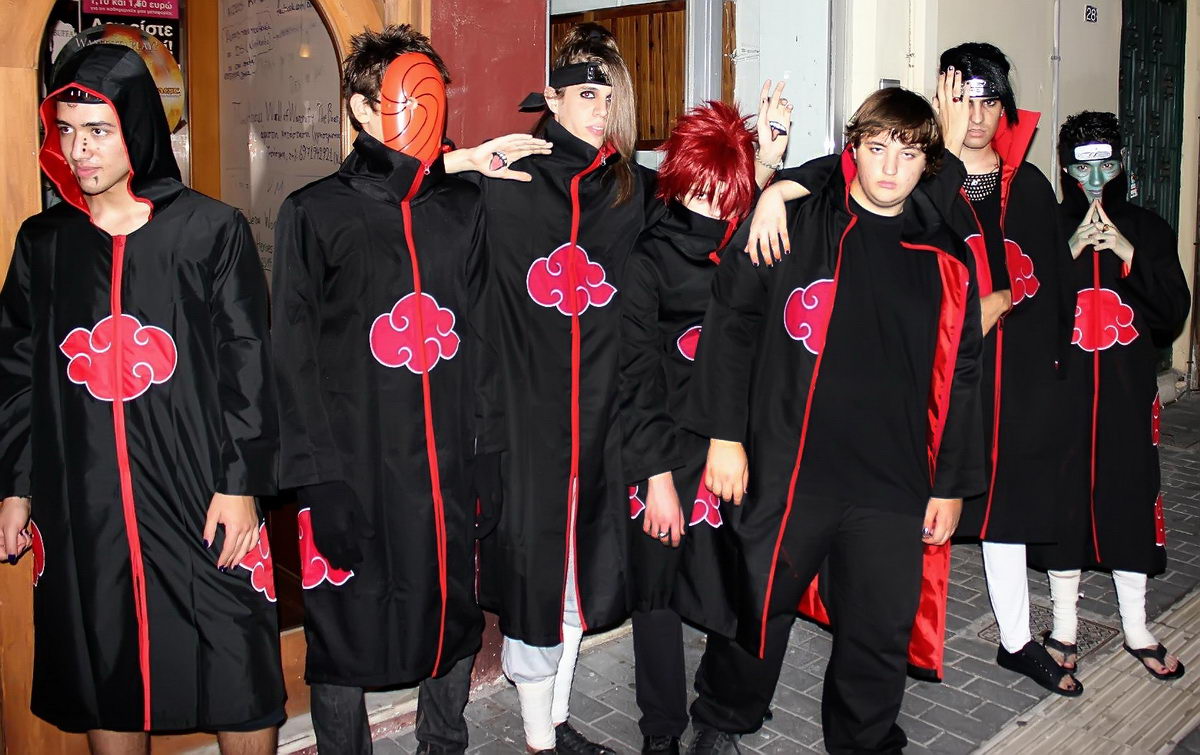 That one time I mentioned above where I managed to talk all the cosplayers into strolling through one the busiest streets of Heraklion! I think this was the turning point for the community in Heraklion, since after that in the span of just one day we went from 20 members in our Facebook group to 200+ and signs of abusive behavior against our community started to disappear slowly!

Never stop doing what you love! No matter what people might say! Fight for your happiness even if it means cosplaying, being able to learn Japanese or playing videogames! Be supportive to the community and the events that take place in your area! Without people supporting those events by attending them, our community would cease to exist. Stay safe, stay happy and keep weebing out! 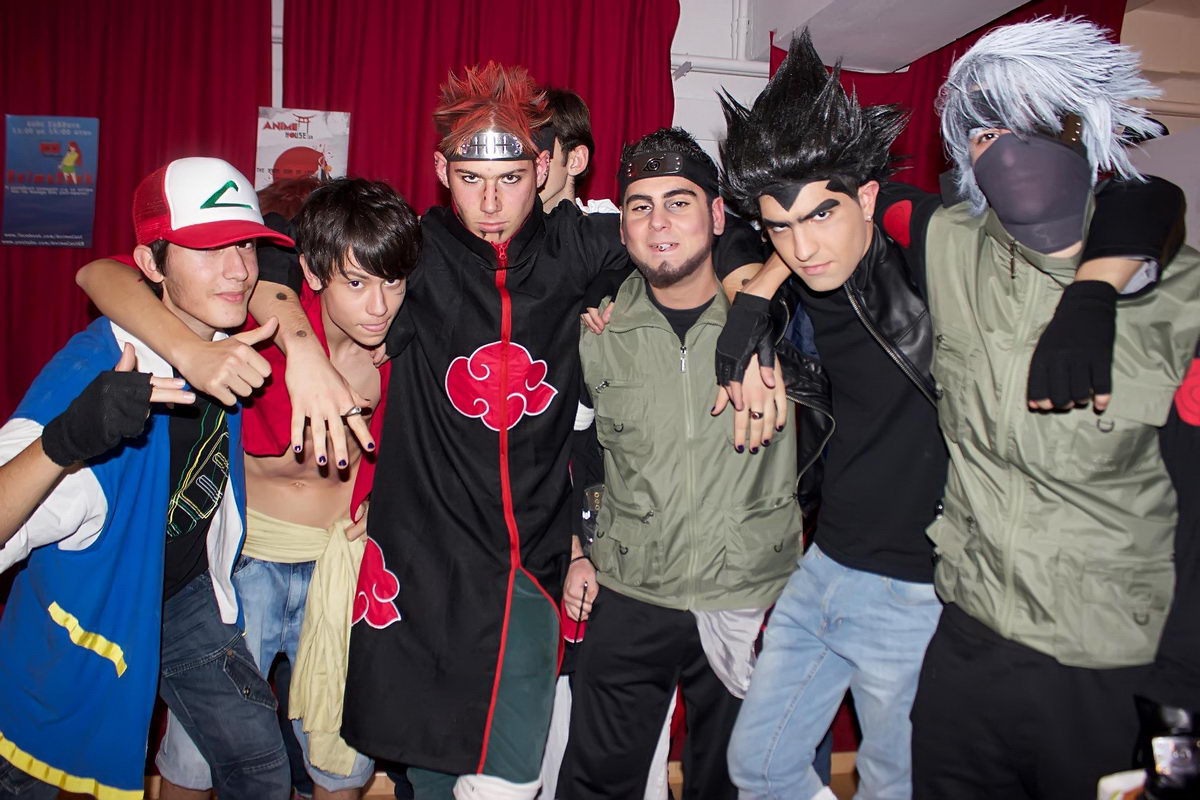 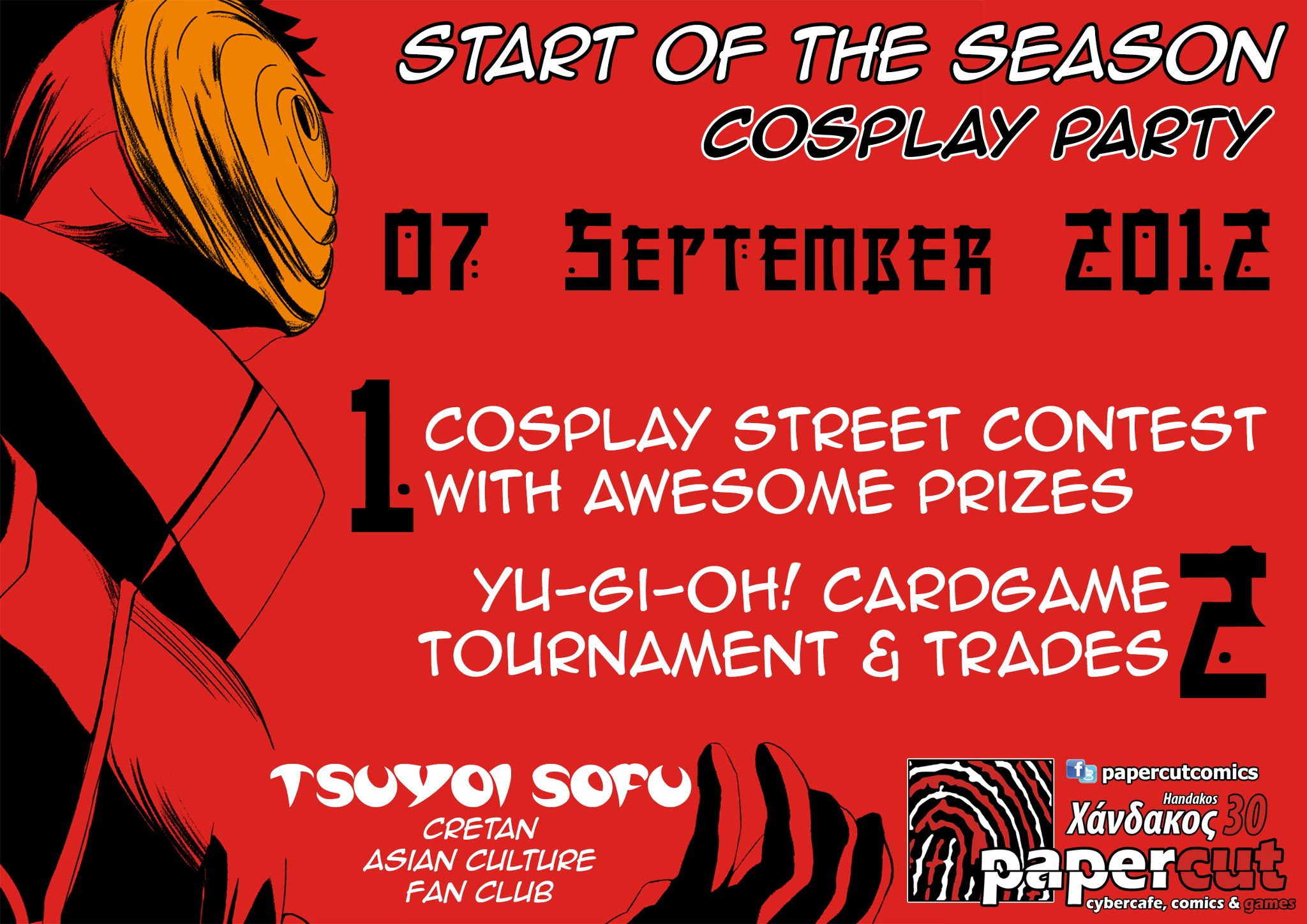 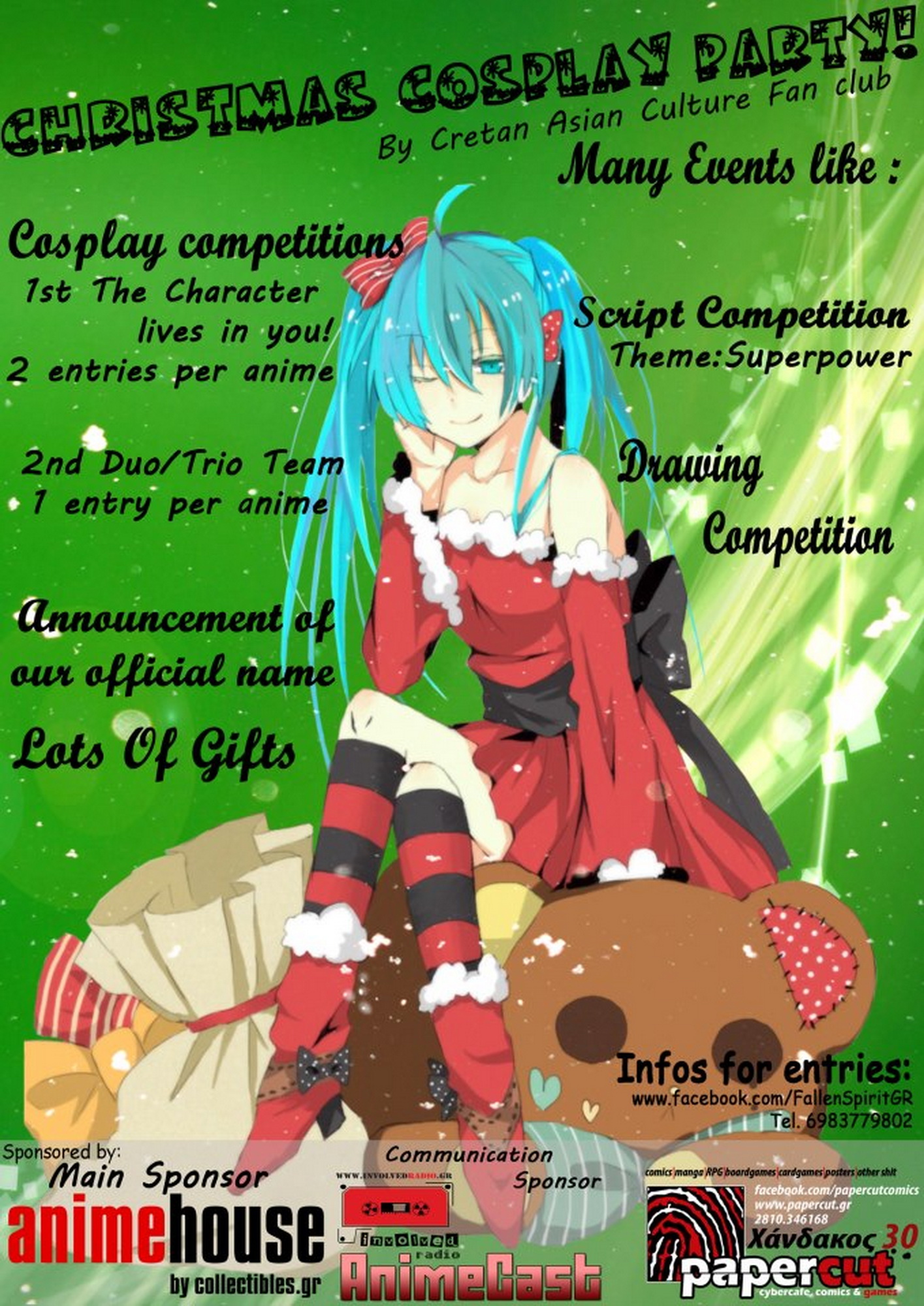 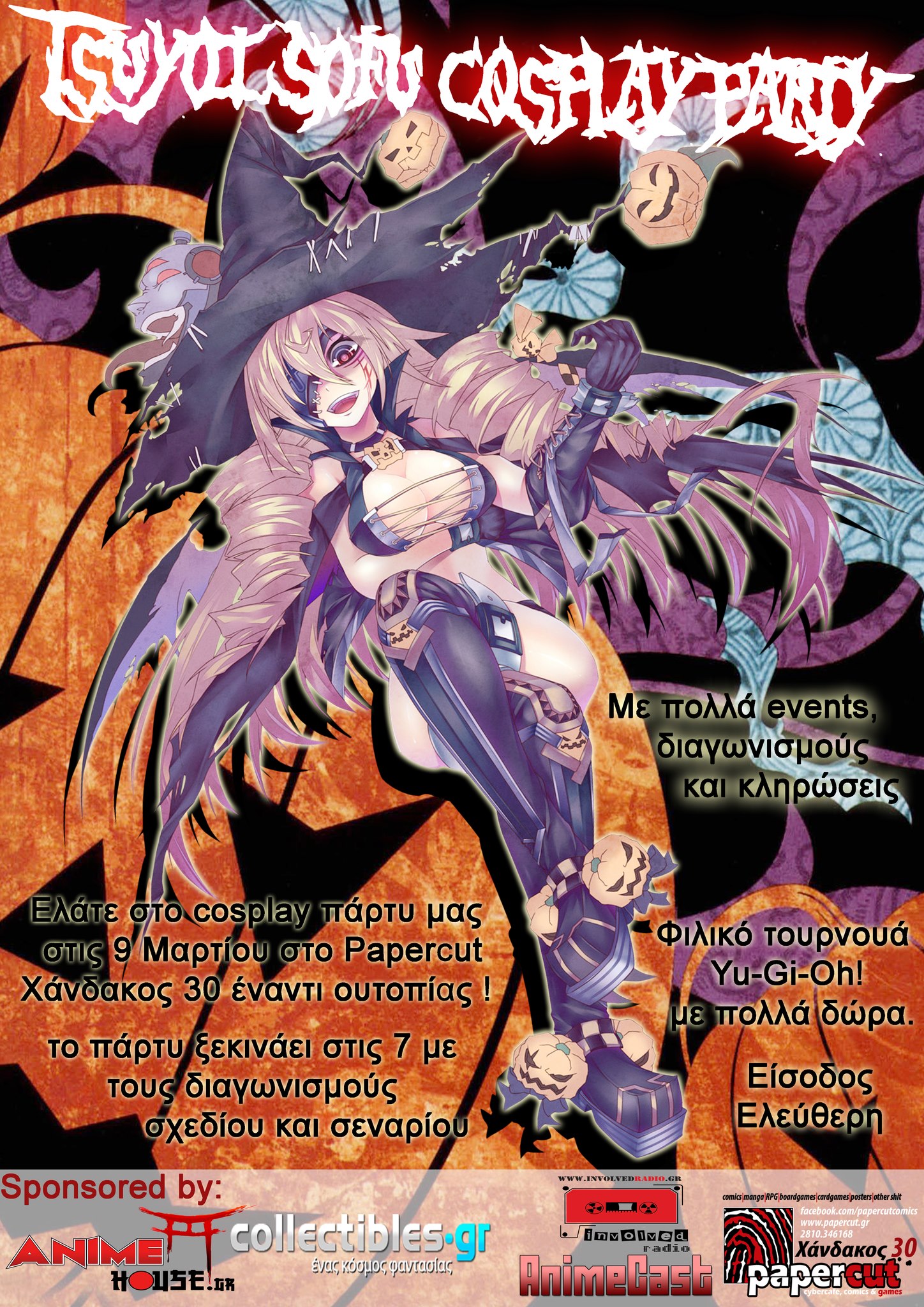 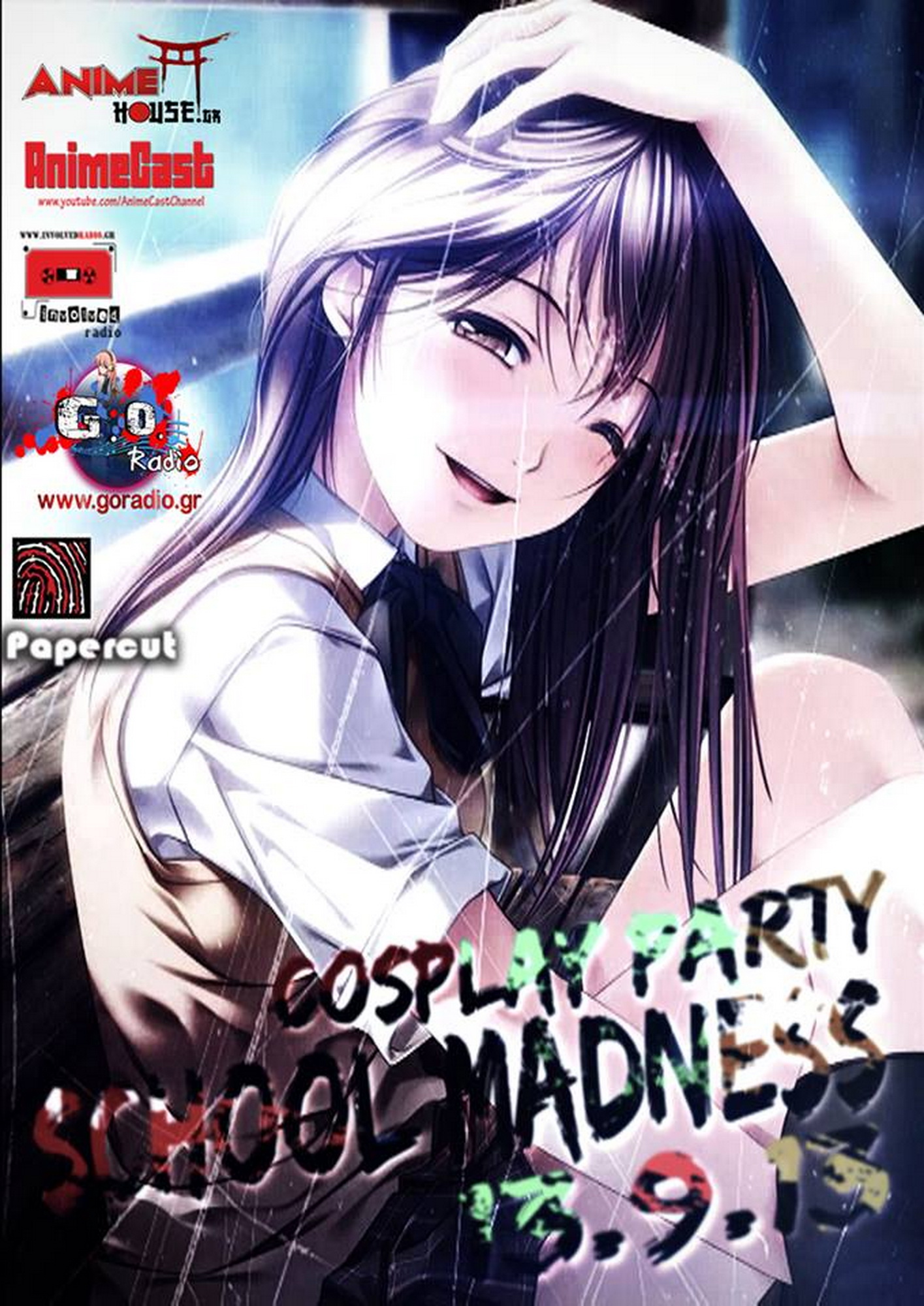